The new round of negotiations between Syria’s warring sides, which were scheduled to begin early next month, has been postponed until February 20, say sources at the United Nations. 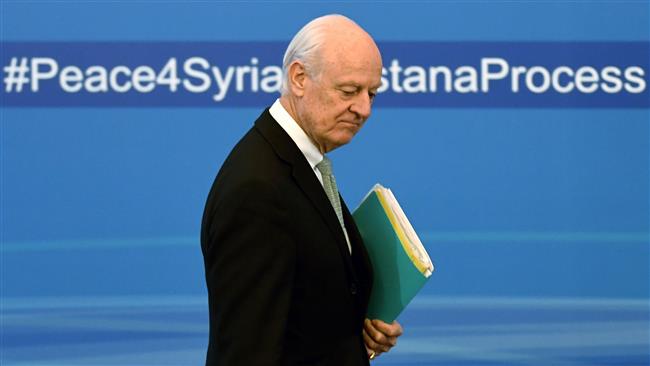 Two unnamed diplomats said UN Special Envoy for Syria, Staffan de Mistura, had announced the delay in the Geneva talks during a closed meeting of the Security Council on Tuesday.

The delay would give the Syria opposition time to prepare and ensure that the discussions are as inclusive as possible, the diplomats quoted the envoy as saying.

Invitations to the Syria peace talks will be sent out on February 8, De Mistura was further cited as saying.

Last week, Russian Foreign Minister Sergei Lavrov told a meeting with Syrian opposition groups that the UN-led peace talks would be postponed, without providing any reasons.

Speaking ahead of the Security Council session, British Ambassador to the UN, Matthew Rycroft, said, "We have been concerned that the Geneva talks have been delayed and we would be concerned if there were any watering down of the basis of those talks.”

Swedish Ambassador to the UN, Olof Skoog, also attached importance to "the confirmation that the UN will lead the next round of talks.”

Organized by Iran, Russia, and Turkey, the latest round of Syria peace talks wrapped up in Kazakhstan's capital, Astana, on January 24.

The three countries agreed on the establishment of a mechanism to support a ceasefire in Syria. The Syria-wide truce, which excludes Daesh and Jabhat Fateh al-Sham terrorist groups, has been in place since December 30, 2016.

The trio further underlined the importance of maintaining the national sovereignty of Syria and stressed that there was no military solution to the conflict in the Arab country.

Over the past almost six years, Syria has been gripped by a militancy it blames on some Western states and their regional allies, Presstv reported.