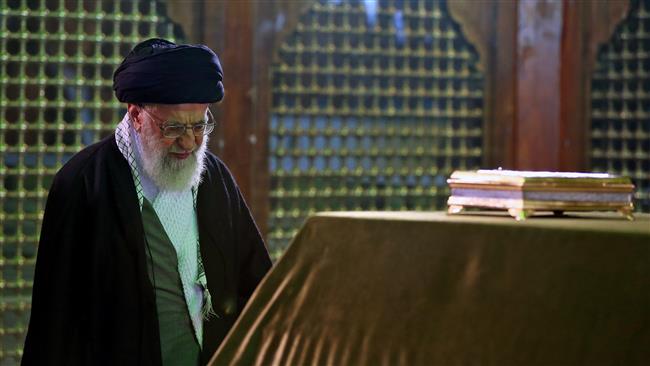 The visit took place on the occasion of Ten-Day Dawn celebrations and in the run-up to the 38th anniversary of the 1979 Islamic Revolution, which put an end to the US-backed Pahlavi monarchy.

The festivities started all over the nation at 9:33 a.m. local time (0603 GMT) on Tuesday, the time when the late founder of the Islamic Republic arrived back home on February 1, 1979 from exile.

A special ceremony was held at Imam Khomeini’s mausoleum south of Tehran, with a host of senior state and military officials as well as thousands of people in attendance.

Simultaneously, special ceremonies were observed in more than 80 Iranian cultural centers in 60 countries to mark the first of the Ten Days of Dawn.

Imam Khomeini spent more than 14 years in exile, mostly in the Iraqi holy city of Najaf. He also spent some time in Turkey and France, before his return to Iran.

The Leader also visited the tombs of the 16 heroic firefighters, who lost their lives battling a massive blaze that consumed a high-rise in downtown Tehran on January 19.

In a message issued on the eve of the burial procession earlier this week, Ayatollah Khamenei praised the sacrifices of the firefighters, saying they are "martyrs on the path of a difficult service and fulfilling a risky duty and, God willing, will never be forgotten.”
(Press TV)
Share to
Related News
Iranians to respond to Trump on upcoming anniv. of Islamic Revolution: Leader
Tags
Leader ، tribute ، martyrs ، Founder of Islamic Republic
Your Comment