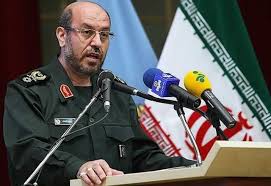 "Iran’s recent missile test is not in contradiction with the  JCPOA, and no will can overshadow it,” he told reporters after cabinet meeting on Wednesday.

"As announced earlier, we will press ahead with our programs with higher precision and speed. We only aim at defending our goals and interests when it comes to defense development. We will not allow any interference,” he added.

Asked about Persian Gulf neighboring states’ drill, he said, southen Persian Gulf countries worried about future are interested to show off their presence in the region and give confidence to their supports following the new atmosphere in the world with Trump came to power.

He reiterated that these moves are futile and states not relying on will of their nations are going to fail to do anything.

"We hope that the issue of Iran’s defense program… does not turn into a pretext for political games,” Mohammad Javad Zarif said at a joint press conference with his visiting French counterpart Jean-Marc Ayrault in Tehran.

Zarif referred to the Islamic Republic’s ballistic missile tests — which the country regularly undertakes to boost its defensive prowess — and said the issue of the tests "falls outside [the framework of the UN Security Council’s] Resolution 2231.”

Resolution 2231 was adopted on July 20, 2015 to endorse a nuclear deal between Iran and six world powers, known as the Joint Comprehensive Plan of Action (JCPOA).

Under the resolution, Iran is "called upon” not to undertake any activity related to missiles "designed to be capable of” delivering nuclear weapons. Iran says it is not involved in any such missile work and has no such warheads.

Zarif said all the parties to the JCPOA, including both France and the previous US administration, have attested that Iran’s missile tests have nothing to do with the nuclear agreement.

Over the past 250 years, Zarif said, Iran has never started any wars, and the country never turns its weapons against anyone but foreign aggressors.

The top Iranian diplomat said the Iranian people do not wait for anyone’s permission to engage in defending themselves given their experience of the 1980-88 war imposed on the Islamic Republic by Iraq and the toll international terrorism has exacted on the country.