Iranian Minister of Energy Hamidreza Chit-Chian said the country stands 14th in the world in terms of its power industry. 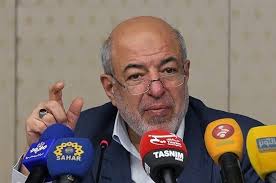 "We announce proudly that Iran ranks 14th in the world in terms of power industry,” he said.
Iran is now manufacturing 98% of the equipment, tools and parts needed for its power industry.

The nominal capacity of Iran's power plants ranks first in the region, a government report said in September.

A senior Iranian energy ministry official announced in May that the country's electricity exports have increased 40% since the beginning of the current Iranian year, and said Tehran has signed several contracts with the neighboring states to export electricity.

He also said Iran has signed several contracts with its neighboring countries in this regard, which will help boost its electricity exports.

Iran exported some 8.6 billion kilowatt hours of electricity during the last Iranian year, which indicates a 29-percent increase in comparison with the corresponding period of the preceding year, he added.

During the last decade, Iran has made huge achievements in various fields of science and technology irrespective of the western sanctions.

The western sanctions have actually backfired since they have pushed Iran's towards self-sufficiency in many areas.