Militants training with US troops to attack Raqqah: Opposition leader

A foreign-backed Syrian opposition figure says members of his militant group are training with US troops in preparation for a joint operation to recapture Daesh-held Raqqah. 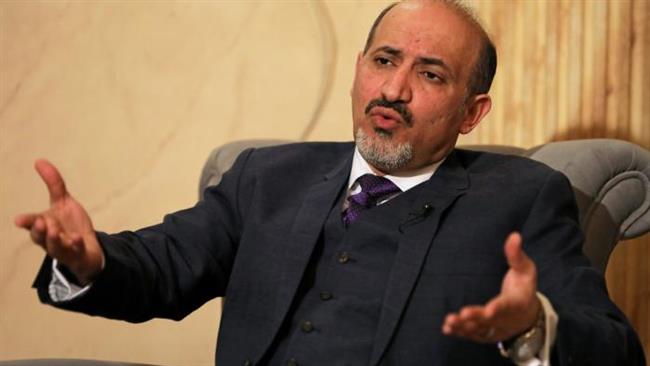 "Now we are preparing for the battle of Raqqah. There is a training program with the coalition forces,” Ahmad Jarba, who commands the so-called Syrian Elite Forces, told Reuters in the Egyptian capital of Cairo on Wednesday.

"We will be ready to enter this battle in force, and we are in the process of preparing for it," said Jarba, who claims to have 3,000 militants under his command.

Jarba said he has had meetings with senior officials of the US army over the past two months, adding he struck a deal with the US military last December to include his force in the battle for Raqqah.

Washington has been supporting a number of militant groups in Syria ever since unrest struck the Arab country in March 2011.

General Carlton Everhart, a commander of the Air Mobility Command, said in January that the US Air Force was increasing airdrops of weapons, ammunition and other equipment to militant groups closing in on Raqqah.

The United States confirmed on Tuesday that it had supplied armored vehicles for the first time to the so-called Syrian Democratic Forces (SDF) – a Kurdish-dominated and anti-Damascus alliance.

"The decision was made by military commanders and has been in the works for some time,” US military spokesman Colonel John Dorrian said.

SDF spokesman Talal Sello said the delivery was made after the new US administration of President Donald Trump took offic, Presstv reported.

"Before we used to receive light weapons, ammunition.... With these armored vehicles we've entered a new phase in the [US] support. It's a sign,” Sello added.

He further noted that the SDF had held meetings with representatives of the new US government, "who had promised … extra support" for the militant group.