The Republican speaker of the US House of Representatives says the nuclear deal between Iran and the world powers, including Washington, cannot be undone despite President Donald Trump’s promise to repeal it immediately. 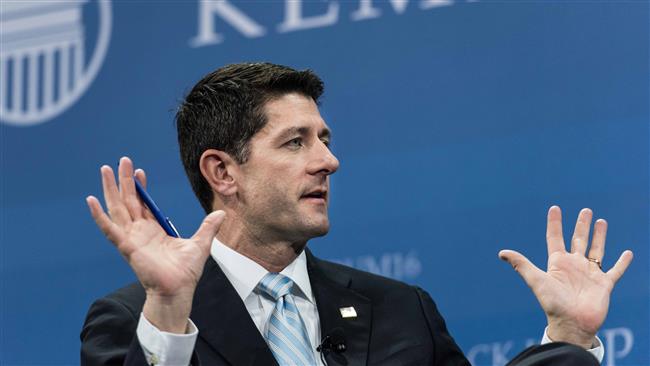 Paul Ryan appeared on NBC's "Meet the Press" on Friday, to admit that the outcome of negotiations pursued by the administration of former President Barack Obama cannot be simply repealed.

"A lot of that toothpaste is already out of the tube,” Ryan noted.

He further distanced himself from the deal by repeating the GOP’s rhetoric against negotiations with Tehran.

"I never supported the deal in the first place. I thought it was a huge mistake, but the multilateral sanctions are done," said Ryan (pictured below). "I don't think you're going to go back and reconstitute the multilateral sanctions that were put in place."
Despite vowing to repeal the Iran nuclear deal, known as the Joint Comprehensive Plan of Action (JCPOA), or renegotiating it, Trump has not yet done anything to the agreement.

The new administration, however, has been criticizing Iran’s test of its ballistic missiles and branding Tehran a "state sponsor of terrorism.”

"I think we should expend our effort where it can pay off the most…What they're doing now makes a lot of sense," Ryan said. "They are a belligerent force in the Middle East… They write on the side of their ballistic missiles in Hebrew, Farsi and English, 'Death to Israel' and 'Death to America.' This is not a peaceful nation."

Tehran has also remained committed to the JCPOA, since it was clinched in 2015, according to the International Atomic Energy Agency (IAEA).

In a Friday tweet, Iranian Foreign Minister Mohammad Javad Zarif indirectly challenged the Trump administration to "make the same statement,” he made in regard to weapons.

"We will never use our weapons against anyone, except in self-defense. Let us see if any of those who complain can make the same statement.”
(Press TV)
Share to
Related News
Iran imperial Meccano set fell apart
We know JCP as benefiting the world: Iran's Government Spokesman
Iran to announce post-JCPOA nuclear achievements in April: AEOI
Consultancy not needed for missile issue: Spokesman of Iran Foreign Ministry
Tags
Ryan ، Iran ، JCPOA
Your Comment