We know JCP as benefiting the world: Iran's Government Spokesman 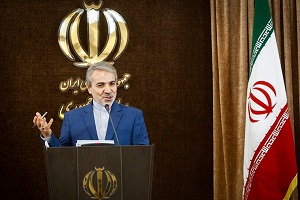 Iranian Government Spokesman Mohammad Bagher Nobakht said at a weekly press conference, ” now, we have become the eighteenth economic power in the world since 1979 Revolution, according to International Monetary Fund".

"When we negotiated the deal with the six world-powers, they said they have been deceived, yet we know for certain that JCPOA benefits the world and it is a win-win deal for all the parties,” Iran's Government
Spokesman noted.

"We haven't had any negotiation with Trump's administration, but our stance is quite clear and is based on our national interests,” he told the Iranian YJC correspondent about Trump's new travel ban.