Swedish Envoy to Iran Helena Sangeland said her country is after quick settlement of fueling problems Iranian planes in the European country. 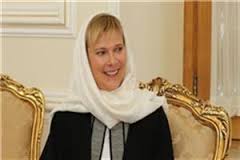 Swedish Prime Minister Stefan Löfven is visiting Iran on February 11-12 to discuss wide-range of issues, including banking with Iranian officials.

He is going to be accompanied by representatives of 20 companies as well as Trade Minister Ann Linde, she said, adding the delegation also includes public and academic officials and is estimated to include 90 people.

"Iran used to be Sweden’s most important regional partner, and this year Swedish Commerce and Investment and Trade Council are going to open offices in Tehran to help Swedish companies willing to have business activities and investment in Iran.”

Sangeland added the volume of bilateral trade exchanges between Iran and Sweden are expected to rise.

She also continued that her country is after fixing financial and banking problems with Iran.
Settlement of fueling problems of Iranian planes is one of the priories for Swedish state.

"We hope that the problem will be fixed soon as soon as possible. One percent of Swedish populations are Iranians, and direct flights between the two countries are quite important. Therefore, we are after a solution to this issue.”