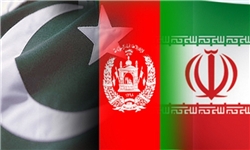 The 12th meeting of senior experts of the trilateral initiative of the countries was held with participants conferred on ways to confront narcotics in Vienna.

The 13th round of meeting of senior experts of the initiative is scheduled to be held in Kabul mid 2017.

Iran has long complained that the global community, specially the western nations, do not contribute their role in the campaign against drugs, saying that Iran is making lone efforts to block the transit of narcotics from Afghanistan to Europe and the US. Meantime, the Iranian police officials maintain that drug production in Afghanistan has undergone a 40-fold increase since the US-led invasion of the country in 2001.

While Afghanistan produced only 185 tons of opium per year under the Taliban, according to the UN statistics, since the US-led invasion, drug production has surged to 3,400 tons annually. In 2007, the opium trade reached an estimated all-time production high of 8,200 tons.