Iranian Defense Minister Brigadier General Hossein Dehqan said the Tel Aviv regime and the Takfiri terrorists nurtured by the US, Israel and certain regional countries pose a major threat to the Middle East. 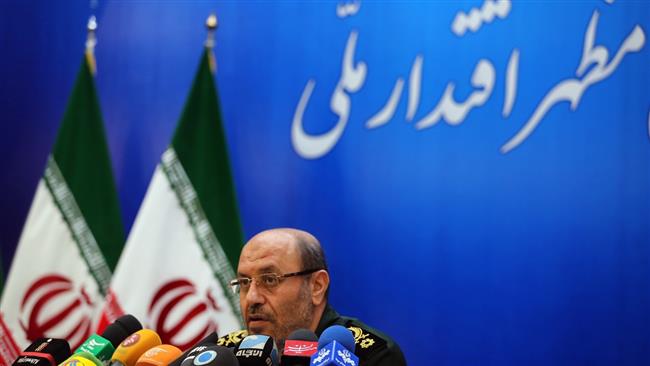 During a television talk on Tuesday night, the Iranian minister described Israel as the source of insecurity in the Middle East region while warning about Takfiri terrorism.

"Today the immediate threat to the region [is the presence of] Takfiri terrorists created by the Americans, Israelis and certain Arab countries of the region, including Saudi Arabia,” he said.

Dehqan said that Takfiri terrorists were ordered by their masters to create insecurity in the region but warned that they actually posed a threat to the entire world.

He added that the sponsors of terrorists would "rue their acts and turn against them" eventually.

He said that the country was actually self-sufficient in manufacturing necessary military equipment.

He also said that Iran would "punish" aggressors while stressing that the country’s doctrine was solely based on deterrence.

"The skies of our country at low, medium and high altitudes are all under the watchful eye of [the Iranian] Air Defense and should a move be made [against the country], [our] domestically-manufactured military hardware" would deliver a proportionate response, Pourdastan said.

"The enemy should know that its moves are under our watchful eye and if it intends to make a move, the [Iranian] Defense will repel it,” he added.

Iranian officials have repeatedly stressed the deterrence nature of the country’s defense program, assuring other countries, including neighboring states, that the Islamic Republic’s military might poses no threat to them.