At least two Palestinians have lost their lives when the Israeli military carried out an airstrike against an area on the border between Egypt's troubled Sinai Peninsula and the besieged Gaza Strip. 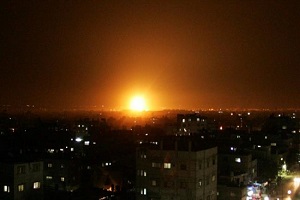 Palestinian sources said the attack targeted a tunnel which Gazans use to bring basic needs into the coastal enclave in the border town of Rafah early on Thursday, leaving two Palestinians dead and five others injured.

The sources identified the deceased as 24-year-old Hessam Hamid al-Soufi and 38-year-old Mohammad Anwar al-Aqra’, both residents of Gaza City. Two of the injured are in critical condition.

The victims have reportedly been taken to the Youssef al-Najjar hospital in Rafah to receive treatment, Arabic-language Palestine al-Yawm news agency reported.

The airstrike came shortly after the Israeli military claimed that it had intercepted several rockets fired from Egypt's Sinai Peninsula at the southern resort town of Eilat. The projectiles did not cause any casualties.

On Monday, two Palestinians were injured when Israeli warplanes struck a farming land in the center of Khan Yunis city, located about 25 kilometers south of Gaza City.

A Palestinian fisherman was also injured after two Israeli airstrikes struck an open area and a Hamas position west of the city of Beit Lahia, located about five kilometers north of Gaza City.

The Israeli military frequently bombs the Gaza Strip, with civilians being the main target of such attacks. In July 2014, Israel waged a war on the Gaza Strip which killed nearly 2,200 Palestinians, including 577 children.

The Gaza Strip has been under an Israeli siege since June 2007. The blockade has caused a decline in living standards as well as unprecedented unemployment and poverty.