Iran's Defense Minister Hossein Dehqan has rejected US media claims of a new missile test by the Islamic Republic as fabricated, saying the allegations are part of a psychological war against Tehran. 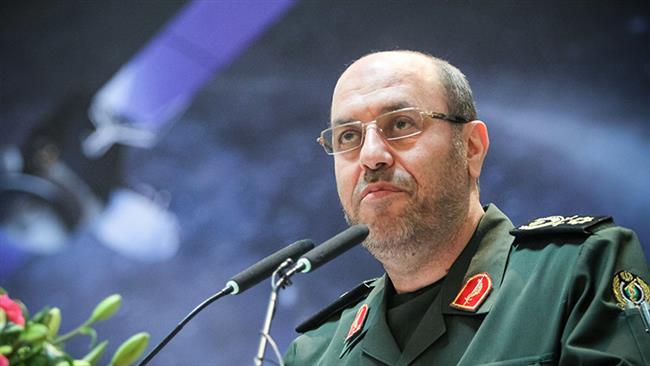 "The new claim by the Americans about a new missile test by Iran is fabricated and is aimed at inciting animosity, psychological war and Iranophobia,” Dehqan told reporters here on Thursday.

On Wednesday, Fox News cited an unnamed US official as saying that Iran had launched a short-range Mersad missile from the same launch pad where it conducted a ballistic missile test in Semnan last month.

"First of all, these claims are fabricated and such an incident has not happened at all. Secondly, it would be absolutely none of their business if such a test had ever been conducted," Dehqan said.

"Thirdly, the Islamic Republic of Iran’s missile program is a conventional program and its missile tests are conducted as part of pre-planned programs aimed at maintaining our country’s defense preparedness,” he added.

The minister said fabricated news as such is disseminated by "the Zionist regime" in line with Israel's "Iranophobia" project in order to instigate world opinion against Iran.

"We advise our southern Persian Gulf neighbors not to be deceived by such propaganda
because the Islamic Republic of Iran has never been and will never be a threat to them," Dehqan said.

"The Americans have launched this psychological war and publicity campaign in an attempt to sell their weapons,” he added.

On February 3, the US administration imposed new sanctions against Iran over the country’s recent successful missile test in Semnan.

The Iranian Foreign Ministry slammed the fresh US sanctions over Iran’s defensive missile program, saying Tehran would deliver a "proportionate and reciprocal" response to the move.

The ministry said Iran’s missile program is an inalienable right of its nation under the international law and the United Nations Charter. The Islamic Republic has always stressed that its military might poses no threat to other countries and is in line with the country’s plan to boost its deterrence power, Presstv reported.