Iran’s Armed Forces do not tie the improvement of their defense power to the so-called JCPOA. 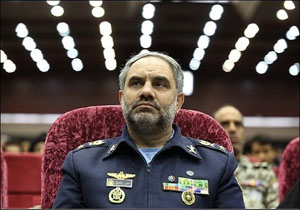 Iran’s Commander of Army Air Force Brigadier General Pilot Hassan Shahsafi at a ceremony in the memorandum of Iran’s Air Force Day expressed that the recent political changes of the US has increased concerns about the acceleration of organized violence and racism raising from the major source of the world’s insecurity, America.

"The US past government records is not more brilliant than its current government. The records of the US unfaithfulness in the implementation of JCPOA and imposing new sanctions under the pretext of missile achievements, the US ex-President’s avoidance to veto Iran Sanction Act (ISA), as well as other numerous cases of this ilk, are the manifestations of the US unfaithfulness and animosity uncovered from behind of its demagogic gesture of democracy and being the world superpower’” he added.

The Iranian Air force commander noted that the defensive power of the Islamic Republic of Iran is exclusively peaceful and that the clear history of Iran and the events taken place in the region are evidence supporting this fact.

" The Air Force, after the Imposed War and specially  during the sanctions era, using the domestic experts and positively interacting with academic centers succeeded to localize a major part of its systems and domestically produce simulators and  vital pieces. Further, stepping in the field of [manufacturing] drones, it has taken a long step to strengthen its defense power based on the the strategy of confronting point targets based on new regional and trans-regional terrorist threats,” General Shahsafi continued noting that Iran’s Armed Forces, the Air Force included, in line with the defense policies of the Islamic Republic of Iran, do not tie the improvement of their defense power to the so-called JCPOA.