Iran says it has identified and arrested in the vicinity of the country's capital a number of Daesh elements planning to carry out acts of sabotage in Tehran. 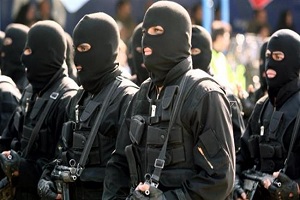 "These individuals sought to [carry out their] plots during Bahman 22 rituals,” Iran’s Attorney General Mohammad Ja’far Montazeri said on Friday, referring to celebrations marking the victory of the Islamic Revolution in 1979.

Millions of Iranians filled the streets countrywide on Friday to relive the day 38 years ago when the nation’s hard-fought Islamic Revolution against the former US-backed regime became victorious.

On, February 11, 1979, the Iranian nation’s struggles and protests against the tyrannous monarchical Pahlavi regime came to fruition under the leadership of Imam Khomeini, the religious and spiritual leader who is known as the "great architect of the Islamic Republic.”

Referring to Iran's support for anti-terrorist operations outside its borders, particularly Syria and Iraq, he said, according to intelligence obtained, the Daesh Takfiri group had had plans to conduct acts of terror inside the country.

He noted that further information on the plots of these nabbed Daesh operatives would be revealed to the Iranian nation within the next few days.

The senior Iranian judicial official emphasized that if the resistance front, supported by Iran, had not stood up against terrorists, Daesh Takfiri terrorists would have reached the country’s borders.

"Know that if you do not slap the enemy in the face outside the country and outside the borders, it will arrive at your gates,” Montazeri said.

Iran has been providing advisory assistance to Syria and Iraq as per a request by the governments of the two countries in their battle against Daesh terrorists.

An Iranian official said in August 2016 that security forces killed an "instrumental” member of the Takfiri terrorist group of Daesh and busted the terror cell he belonged to during clashes in the country’s west.

Governor General of Kermanshah Province Asadollah Razani added that the terror cell had infiltrated the western province, which borders Iraq, and had been tasked with staging suicide strikes against different targets across the country.

Iranian forces have, over the past months, engaged in clashes with terrorist groups, thwarting plots on the border and within the country, arresting several operatives, and confiscating large amounts of explosives and bomb-making materials.