A number of high-ranking Russian officials are going to visit Iran in late weeks of the current Iranian calendar year (which ends on March 20, 2016). 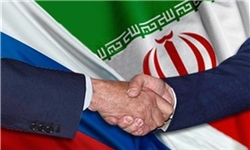 Rogozin is visiting Iran next week at top of a delegation to meet with Iranian Vice President for Science and Technology Sorena Sattari and Defense Minister Hossein Dehghan to discuss bilateral cooperation in technology and defense industries.

Igor Shuvalov would be in Iran late February to discuss ways for boosting bilateral economic and political ties as well as the further expansion of Iran-Eurasian economic commission cooperation, Sanaie said.

He also said that Novak and Nikitina would be traveling to Iran during the same time-frame.

According to the Iranian envoy, Iran is going to start building 4 new units of thermal power plants late February.

The four units with the capacity of 1400-MW would be built under agreements of Iranian and Russian presidents with Russia providing $1 billion finance.

Iran-Russia commercial seminar would be held in Tehran on February 20-22 with representatives of private sectors and economic sectors of the two sides are attending.