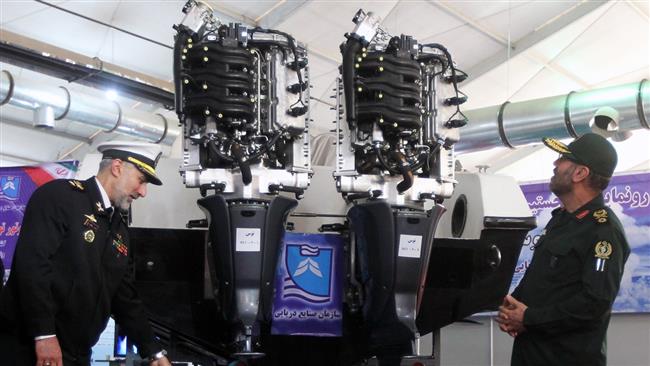 Addressing the ceremony on Tuesday, Dehqan said the marine engine was totally designed and manufactured by Iranian experts, adding that the propulsion system was one of the most important parts of vessels.

Iran’s Defense Ministry, Navy and the Islamic Revolution Guards Corps’ (IRGC) Naval Forces have put the design and manufacture of marine propellers on their agenda as part of efforts to make greater use of maritime resources, which can help national development, the minister said, noting that the Tous marine engine was one of the most valuable achievements made in this regard.

The defense minister noted that the 200-horsepower engine can provide speeds of up to 41 knot (almost 74 kilometers per hour) for vessels, Presstv reported.

Dehqan further stressed the importance of using nuclear energy to develop the country’s naval industry, including in the production of marine propellers.

"In the field of marine advances, particularly in the sector of large vessels, we should use nuclear technology to develop marine propellers,” he said, adding that the country must also move toward reducing the environmental impacts of marine engines.

In December 2016, Iranian President Hassan Rouhani ordered the Atomic Energy Organization of Iran (AEOI) to draw up appropriate plans to design and manufacture nuclear propulsion devices as well as the fuel required for them in response to the US violation of the landmark nuclear agreement signed between Iran and the P5+1 group of countries in 2015.

The president said the measures were warranted in light of the United States’ foot-dragging in fulfilling its commitments under the multilateral nuclear deal - known as the Joint Comprehensive Plan of Action (JCPOA) -- and the extension of an anti-Iran legislation in the US Congress known as the Iran Sanctions Act (ISA).

Iran had warned it would take reciprocal action if the ISA was approved. The Islamic Republic has written a letter of complaint to the United Nations over the vote on the legislation at the US Congress.