Unilateral and threatening actions not permitted in the name of fighting terrorism: Iran's envoy to UN 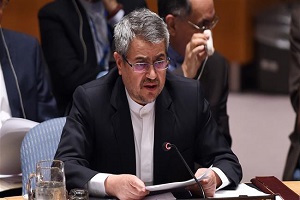 Iran’s permanent envoy to the UN, GholamAli Khoshrou, made a speech in UN Security Council on "Protection of Critical Infrastructure against Terrorist Attacks" on Monday evening.

Here is full script of his speech:

At the outset, let me express my gratitude to the Delegation of Ukraine for organizing this debate and thank the briefers for their inputs to it.

I aligned myself to the statement of the representative of the Bolivarian Republic Venezuela on behalf of the Non-Aligned Movement.

Today we are facing a proliferation of terrorist acts at unprecedented levels. No country is immune from the possibility of falling victim to terrorist acts. The most recent terrorist attacks, particularly those committed by Da'esh and other terrorist and extremist groups indicate those critical infrastructures are increasingly becoming attractive targets for terrorist operations. The real dimensions of this global menace is revealed when we note the fact that there are still tens of thousands terrorists, including women and youth, from over 100 countries from all regions of the world, who have joined the files and ranks of terrorist organizations.

Terrorist acts against critical infrastructure create the state of terror in the general public and inflict adverse consequences on the economic and social development of States, including the possible disruption of the delivery of basic services. Therefore, there is a dire need to protect these structures against a growing number of diverse terrorist attacks, both physical and cyber.

Terrorist attacks against infrastructure such as energy and water supply, financial institutions, telecommunications, transportation or governmental structures etc. may well result in civilian fatalities, harm and loss of property on a large scale, disrupt proper functioning of public services, and bring chaos in the societies. They may also cause widespread environmental damage, as well as significantly undermine national resources and capabilities to face its challenges and emergencies.

Thus, protection of critical infrastructures should be seen in the framework of the fight against terrorism, and needs to be incorporated into the national plans for countering and preventing terrorism. At the international level, the enhanced resilience of the international community to face these threats is also the key to curb the loss of human lives and protect the services which are basics for our societies.

The attacks in Turkey, Iraq, Brussels, Afghanistan and some African countries are most recent terrorist attacks targeting critical infrastructures. At the same time, we should not overlook the fact that collective punishment of peoples or brutalization of peoples under foreign occupation such as blockade, which has been exercised by Israeli regime against Palestinians, for decades, also constitutes the gravest form of terrorism, depriving consecutive Palestinian generations from their vital infrastructures and natural resource. The cases of continuation of wars, as in Yemen also decimated much of already impoverished civilian infrastructure, strengthening terrorists and help destabilizing the region.

Faced with terrorism as a global threat, we need to build up stronger collective political will for international counter-terrorism cooperation. At the same time, we emphasize that any fight against terrorism must take place in accordance with the purposes and principles of the UN Charter and international law.

We need robust coherent multilateral mechanisms in order to be able to responding to terrorism as a common threat to our world, since there are not simple solutions to complicated phenomenon such as terrorism, only
such mechanisms can bring more coherence and coordination in our policies and prevent careless, imprudent and dangerous unilateral actions in the name of fighting terrorism.

We believe in the centrality of the role of UN and other relevant international and regional organizations in counter terrorism efforts and conflict prevention. This will help capacity building and further enhancing the effectiveness of the overall efforts to counter terrorist attacks, including against critical infrastructure, at national, regional and international levels.