Syrian president vows to liberate ‘every inch’ of country

Syrian President Bashar al-Assad has underlined his government’s determination to liberate “every inch” of Syria held by foreign-backed militants. 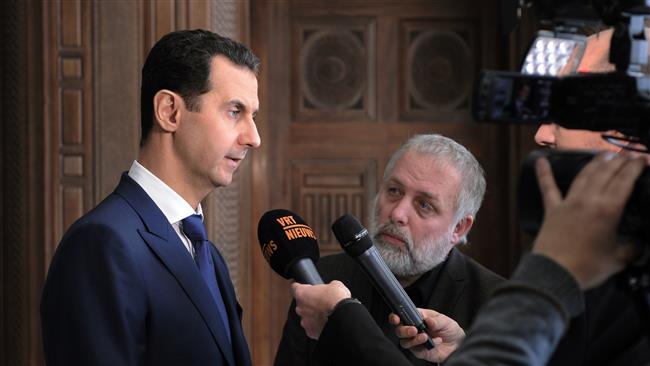 In a Thursday interview with French media, Assad said the liberation of the northern city of Raqqah is not the only priority for his government, noting that "Raqqah is a symbol."
"You have ISIS (Daesh) close to Damascus, you have them everywhere," Assad said.

"Everywhere is a priority depending on the development of the battle," he added.

"For us it is all the same, Raqqah, Palmyra, Idlib, it's all the same," Assad pointed out, stressing that it is the "duty of any government" to regain control of "every inch" of its territory.

The remarks came as the Syrian army uploaded a video to its website showing government troops clashing with militants from al-Nusra Front in Dara’a Province.

The militants say they seek to obstruct any army attempts to capture a strategic border crossing with Jordan. The army's control over the crossing in the southern strip of the city would sever the militants’ access to the eastern and western parts of Dara’a.

In his interview, Assad criticized the West for its "passive” role in helping resolve the Syria crisis and said Western countries had "lost their chance of achieving anything in Geneva twice."

Assad praised Turkey, Russia and Iran for leading the Syrian peace talks in the Kazakh capital, Astana, and denounced the West for supporting "those groups that represented the terrorists against the government.”

The opening of the negotiations between Damascus and opposition groups in Astana was slated to be held on Thursday.

The first round of Astana talks in January brought together representatives of the Damascus government and opposition groups for the first time during nearly six years of the conflict.

Russia, Iran and Turkey agreed at the end of the talks to establish a mechanism aimed at monitoring the ceasefire that took effect across Syria on December 30, 2016.

Syria’s warring sides are also set to hold a separate round of talks in the Swiss city of Geneva on February 20 under the auspices of the United Nations.

Syria has been fighting foreign-sponsored militancy since March 2011. UN Special Envoy for Syria Staffan de Mistura estimated in August last year that more than 400,000 people had been killed in the Syrian crisis until then.

The UN has stopped its official casualty count in Syria, citing its inability to verify the figures it receives from various sources.