A suicide bomber attacked a crowded Sufi shrine in southern Pakistan on Thursday, killing at least 72 people and wounding dozens more in the deadliest of a wave of bombings across the South Asian nation this week. 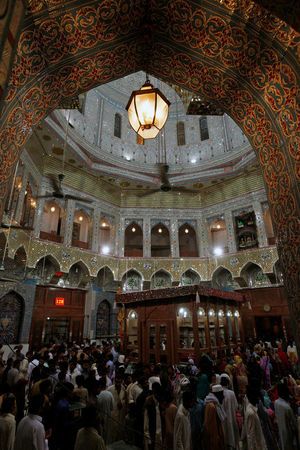 A spokesman for medical charity Edhi said the attacker appeared to have targeted the women's wing of the shrine, and around 30 children accompanying their mothers were dead.

Senior police officer Shabbir Sethar told Reuters from a local hospital that the death toll was likely to rise.

"At least 72 are dead and over 150 have been injured," Sethar said by telephone.

Television footage from the famous Lal Shahbaz Qalandar shrine in the town of Sehwan Sharif showed army and paramilitary medical teams reaching the site and injured people being taken to nearby hospitals in ambulances and a military helicopter.

"We were there for the love of our saint, for the worship of Allah," a wailing woman told the Dawn News television channel outside the shrine, her headscarf streaked in blood. "Who would hurt us when we were there for devotion?"