The Turkish military has claimed that it is close to capturing the northern Syrian city of al-Bab in Raqqah Province from the Daesh Takfiri terrorists. 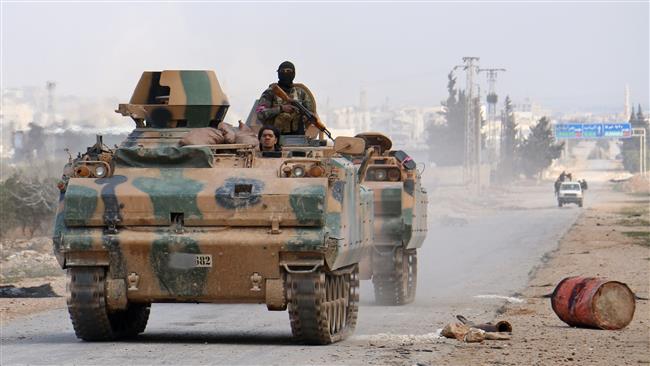 "The operation to gain complete control of the al-Bab region has neared its end and the resistance of the Daesh terror group has largely been broken,” the Turkish military announced in a Friday statement.

According to the so-called Syrian Observatory for Human Rights, nine civilians were killed in overnight Turkish bombardment of the city, but Ankara claims the shelling killed 13 terrorists.

"In the past 48 hours, Turkish airstrikes and shelling have killed 45 civilians, including 18 children and 14 women,” said Rami Abdel Rahman, head of the Observatory.

The Turkish Air Force and special ground forces kicked off their operation inside Syria last August in a declared bid to rid the border area of Daesh terrorists and Kurdish militants.

The operation was not coordinated with the Syrian government, which has described it as a violation of the Arab country’s sovereignty.

President Tayyip Erdogan has stressed that the next target for the Turkish offensive should be the city of Raqqah, which is already encircled by different fronts, including Kurdish militias, the Turkish military and Syrian army forces.

Turkey seeks to continue the operation with local Arab forces, and not Kurdish militants which Ankara considers as terrorists.

The government in Ankara claims that recent terrorist attacks in Turkey, including a New Year's Day shooting in an Istanbul nightclub that killed 39 people, had been masterminded in the Daesh-held cities of al-Bab and Raqqah.