The 6th International Conference on Palestinian Intifada seeks to emphasize on the importance of the resistance against Zionism in the Occupied Territories. 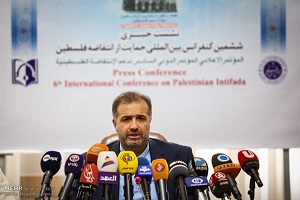 Mr. Kazem Jalali, MP and head of Parliament Research Center told reporters on Saturday that 80 countries would participate in the Conference to be held February 21-22 in Tehran; "the Conference was passed in the Parliament in 1990 and so far, 5 rounds of the conference had been held; the upcoming edition is contextualized according to the latest developments in the Occupied Territories where Zionist regime had been waging misguided efforts to relegate Palestinian issue to the lower priorities in the Islamic world through engaging countries in the Middle East in a proxy war and sectarian violence,” he added.

"4 committees including Parliamentary, Youth, NGOs, and Resistance Movements will be established in the Conference; Ali Larijani, Parliament Speaker will chair the Conference and Leader’s statement will open the event in Summit Hall,” Jalali told the press.