The Atomic Energy Organization of Iran (AEOI) says Tehran is weighing requests from some European states to purchase heavy water from the Islamic Republic. 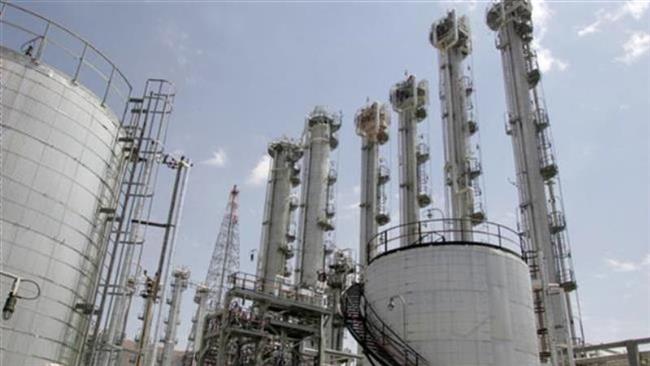 "Following the sale of 70 tonnes of heavy water to Russia and the US, some European countries have asked for [the purchase of Iran’s] heavy water and we are considering their requests,” Ali Asghar Zare'an, special assistant to the AEOI head, Ali Akbar Salehi, said on Saturday.

The AEOI chief said in October last year that Iran had sold 32 tonnes of heavy water to the United States and delivered 38 tonnes of the nuclear substance to Russia.

Pointing to the increasing demand for heavy water worldwide, Salehi said Iran had become a major international supplier of the substance.
He also added that heavy water was not used only in reactors but could also be utilized in various industries, including pharmaceuticals.

Elsewhere in his remarks, Zare'an said that Iran would unveil the first domestically-manufactured centrifuge which would be utilized in the country’s oil industry on April 9.

He said that the Islamic Republic had joined the world nuclear club and added, "In addition to the production and sale of heavy water with a high-level purity, we are witnessing the purchase of a large quantity of high-enriched uranium.”

The AEOI official also pointed to the injection of uranium hexafluoride (UF6) into advanced domestically-manufactured centrifuge machines, known as IR-8, and said the move was aimed at supplying uranium for power plants.

On January 28, the AEOI said that Iran had started injecting uranium hexafluoride into IR-8 centrifuge machines to launch an important phase of the country’s research and development plans.

Iran has successfully conducted all mechanical tests of the machines over the past three years, the AEOI said, adding that the IR-8 centrifuge machines had the capacity to enrich uranium some 20 times more than the IR-1 ones.

Iran and the five permanent members of the United Nations Security Council -- the United States, France, Britain, Russia and China plus Germany -- signed the landmark nuclear agreement, known as the Joint Comprehensive Plan of Action (JCPOA), on July 14, 2015 and started implementing it on January 16, 2016.

Under the nuclear agreement, Iran undertook to put limitations on its nuclear program in exchange for the removal of nuclear-related sanctions imposed against Tehran, Presstv reported.