Zarrei a Middle East issues expert says the silence of the media subjected to Imperialism has encouraged the Zionist regime to insist more and more on its inhumane actions against the Palestinian nation. 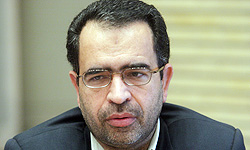 Iranian analyst and expert in Middle East issues Asghar Zarrei said that what has happened in the occupied Palestine is a sheer violation of the human rights of citizens who are the original owners of the country; the Zionist regime, established in 1948 with he support of big powers, violated even the most preliminary rights of Palestinians and occupied their land with devastating wars supported by such powers as Britain, US, France.

He asserted that every week we are noticed of either arresting or killing a number of Palestinians including women, children, or adults, while the world media keep silent to these crimes and even do not reflect its news.

Referring to the wars the Zionist regime has waged against Palestine nation in Gaza Strip and the defeat of the regime, Zarrei said in the recent years the Zionist regime has increased its pressures and invading attacks against the Palestinians both in Gaza Strip and West Bank, and put the Judaization of Palestinian settlements on its agenda. "despite all of these pressures and restrictions created for Palestinian citizens, international associations has put a blind eye on the issue and powers like the US and EU have support it. Yet, the Palestinian nation are not frustrated and still pursue their preliminary rights and liberation of the occupied lands” he added. "Despite the fact that the expansion of Jewish settlements was faced with the EU criticism and that the US sufficed to an abstention vote on the issue in the Security Council and a resolution against the Zionist regime was issued, the regime with a complete rudeness ignored all of UN resolutions and decisions" Zarrei noted.

This analyst of Middle East issues stressed that the ignorance and silence of the media subjected to Imperialism and the US and EU supports to the Zionist regime’s acts of violation has caused the regime insist more and more on its invasion and inhumane actions against the Palestinian nation.