US seeks to divert Muslim nations from Palestinian cause: Scholar

The United States and Israel are trying to sow discord among Muslim and Arab nations and divert them from one of the main problems of the Middle East, which is agony of the Palestinian people, says Jamal Wakim, a professor at the Lebanese International University from Beirut. 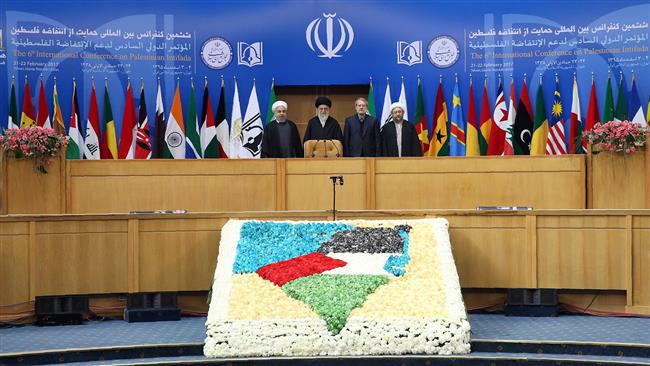 The US and the Tel Aviv regime want to "substitute the Arab-Israeli struggle with a Persian-Arab struggle or with a [Shia]-Sunni struggle; so, it is a way to divert the attention from the main struggle and cause, which is Palestine,” Wakim said on Tuesday.
"The Zionist regime is a tiny regime that is surrounded by majority of Arabs and Muslims,” and this is why the United States attempts to redraw the geopolitical map of the region, he added.
The US-Israeli alliance seeks to implement its agenda by "stirring up conflicts between various sects” and ethnicities in the Middle East, the commentator noted.
The comments came as Iran is holding the 6th International Conference in Support of the Palestinian Intifada (Uprising) in Tehran. Nearly 700 foreign guests and representatives of Palestinian organizations are taking part in the conference.
Wakim emphasized that the conference is very important to support the Palestinian Intifada against Israeli aggression, especially at the time when "the United States and Israel are pushing to liquidate all remnants of the Palestinian cause.”
In an opening speech at the conference, Leader of the Islamic Revolution Ayatollah Seyyed Ali Khamenei said the "dangers originating from the presence of the Zionist regime should never be ignored.”
According to Wakim, Washington and Tel Aviv are trying to normalize relations with Arab states "as a first step towards isolating Iran, Syria and other Islamic powers that are anti-American.”
He further warned about the consequence of neglecting the Israeli menace, noting that the conference is important in uniting Muslim and Arab nations in order to stop the Israeli regime, which might carry out a new "aggression against forces of resistance” in Palestine, Lebanon and Syria.