More than 200 protesters arrested during the inauguration of US President Donald Trump have been indicted on felony rioting charges. 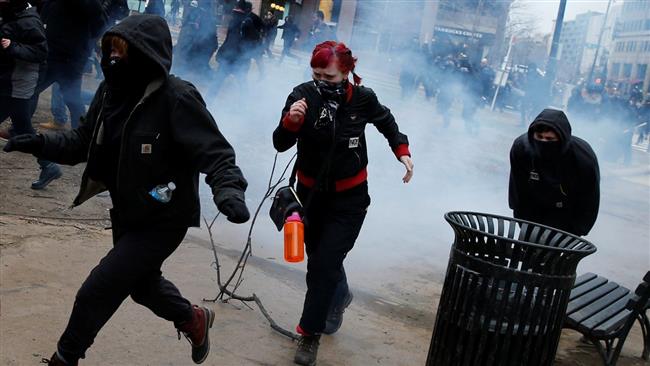 A federal grand jury in Washington, DC, indicted a total of 214 people Tuesday in connection with the January 20 demonstration which drew thousands of protesters to downtown Washington as Trump was being sworn in.
The prosecutors alleged that those indicted used "black bloc" tactics, causing violence and attempting to disguise their identities by covering their faces.
According to the indictment, some protesters were armed with hammers, crowbars, bricks, rocks, flares, firecrackers and other explosive devices.
They have been accused of attacking a limousine driver, smashing windows of local businesses, damaging a government vehicle and committing other violent acts.
If convicted, the protesters could face a maximum jail sentence of up to 10 years, and a fine of up to $25,000.
Six police officers were hurt during clashes with Inauguration Day protesters who reportedly hurled rocks and firecrackers at them.
A total of 231 people were arrested during protest rallies in downtown Washington.
Since his inauguration, Trump has faced nearly non-stop protests and rallies condemning his divisive rhetoric and controversial immigration policy.