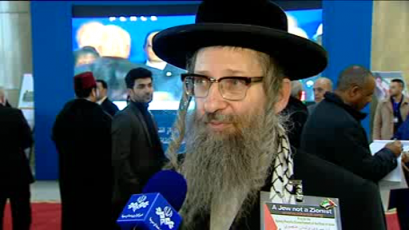 "Crimes against humanity, crackdown on defenseless people and plundering their assets completely run counter to Torah and we can never accept the occupation,” he said on the sidelines of 6th international conference on Palestinian Intifada in Tehran on Wednesday.
"We are completely against the Israeli Zionist state and existence of Israeli Zionist state runs counter to real Judaism,” he added.
Judaism means surrender to God’s orders, but Zionism is changing Judaism to nationalism, he added.
Weiss added that the idea of establishing a Jewish country is what God clearly asked us to avoid 2000 years ago.
"I came from the US and another Rabbi came from Britain to this conference to openly express that Israeli Zionist state disturbs peace and stability in the world.”
Share to
Related News
Syria war guarantees shared interests of powers, Israel: President Assad
Iran: Israel showed it masterminds Syria war
Indonesian lawmaker: We are against Israel
International conference on Palestine enters second day in Iranian capital
Tags
Iran ، palestine ، intifada
Your Comment