Iraqi ground troops, backed by the army’s air force, have reportedly taken control of the Mosul air port amid a new offensive to liberate the Daesh-held western half of the city, which serves as the last urban stronghold of the terror group in the Arab state. 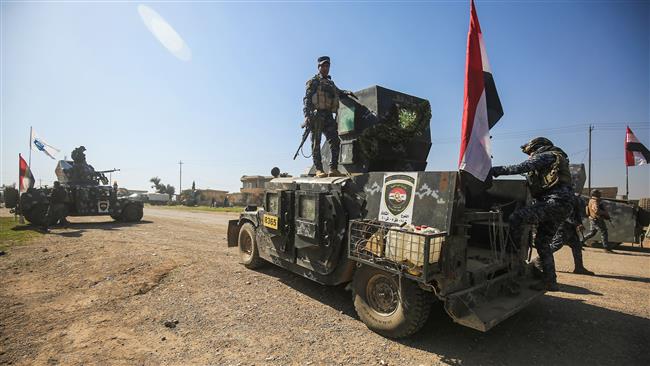 Iraqi media reported the full liberation of the Mosul airport on Thursday hours after army troops and allied fighters launched an operation to retake the facility, which lies on the west bank of Tigris River running through the city.
Commander of Federal Police Forces Lieutenant General Raed Shaker Jawdat announced the operation in a statement on Thursday, saying that members of the Iraqi federal police and rapid response forces were engaged in the multi-pronged offensive to liberate the airport, Arabic-language al-Sumaria television network reported.
He said government troops were receiving support from Iraqi helicopter gunships and artillery units, stressing that the bulk of Daesh fortifications has been destroyed so far.
Major General Najim al-Jabouri, the head of the Operations Command in Nineveh Province, of which Mosul is the capital, also pointed out that Iraqi forces were advancing to establish control over Ghazlani airbase.
"Our forces will prevail and liberate the Mosul airport as soon as possible,” Jabouri said. "Just like Qayyarah Airfield, we will take advantage of the Mosul airport to attack Daesh.”
Since earlier this week, Iraqi forces, backed by fighters from the Popular Mobilization Units, have been closing in on the Daesh-led western half of Mosul after dealing severe blows to the terror group on the eastern front.
The developments came a day after Iraq’s Joint Operations Command (JOC) stated that Iraqi F-16 fighter jets had carried out a string of airstrikes on the outskirts of Tal Afar city, located 63 kilometers west of Mosul.
Commander of Nineveh Liberation Operation, Lieutenant General Abdul Amir Yarallah, said on Wednesday that the Iraqi military aircraft destroyed a car bomb workshop used by the terror group in Khuwainiyah village, and killed 20 extremists in the adjacent village of al-Alow.
Yarallah added that a Daesh car bomb workshop was also destroyed in Alow. Tens of Daesh Takfiris were killed and another workshop for manufacturing improvised explosive devices was destroyed as Iraqi warplanes bombarded al-Tawim village.
Meanwhile, a number of explosive-laden car were destroyed and six Daesh members killed when Iraqi jets struck al-Sahaji village west of Mosul.
Also on Wednesday, a spokesman for the Popular Mobilization Units -- commonly known by the Arabic name Hashd al-Sha’abi -- Ahmed al-Assadi, said the pro-government fighters have established control over the strategic road linking Tal Afar to Mosul.
Furthermore, the 26th Brigade of Hashd al-Sha’abi force shot down a Daesh drone as it flying in the skies over Tak Kisum village.
Meanwhile, Hashd al-Sha’abi media bureau announced in a statement on Wednesday that Iraqi warplanes had targeted an area in Ayn Talawi village on the western outskirts of Mosul, killing a number of militants.
The statement added that self-proclaimed Daesh governor for Tal Afar, identified as Mostafa Yusef, was killed in the aerial attack.
Meanwhile, international aid organizations have warned against the mass exodus of hundreds of thousands of civilians from Mosul in the wake of the final stage of the battle to recapture the city from Daesh Takfiris, Presstv reported.
Makeshift camps are being built up in nine cities near Mosul, and tents are being pitched in existing camps to accommodate up to 400,000 internally displaced people.
"The greatest concern is the fact that we might have a massive surge of civilians being displaced,” Hala Jaber, a spokesperson for the International Organization for Migration (IOM), said.
The IOM press officer added, "We are preparing to expand the camps and build up emergency sites to be able to take the numbers.”
More than 217,000 people have been displaced from eastern Mosul ever since a major operation was launched on October 17, 2016. Iraqi government forces and Hashd al-Sha’abi fighters regained control of the area last month.
Some 57,000 people are estimated to have already returned to their liberated neighborhoods.
Share to
Related News
Battle for Mosul is in last stage, Iraqi PM Abadi says
Turkey-backed Kurds clash with PKK branch in N Iraq
Daesh terrorists launch chemical attack on eastern Mosul: Cmdr.
Tags
Iraq ، airport ، ISIL
Your Comment