Iran: US to be confronted by world if breaches nuclear deal

Iranian Deputy Foreign Minister for American and European Affairs Majid Takht-Ravanchi said that Trump would be confronted by the world in case it violates his presidential campaign slogans on the nuclear deal. 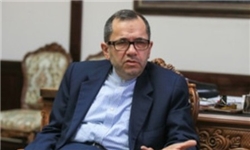 He said that in case the Joint Comprehensive Plan of Action (JCPOA) is breached, "and we figure out, through the JCPOA, that our rights will not be reserved, we can ignore our commitments partly or wholly.”
Ravanchi also warned that Iran can go back to its previous (nuclear) program and even in a more advanced level it case it decides to do so.
"We accepted a series of limitation for a period of time under the JCPOA, however in case the JCPOA is breached, there will be no limitation.”
The Iranian official continued that Iran as a Non-Proliferation Treaty (NPT), fulfills its commitments.  "Iran has proved that it abides by its commitments when it is committed to do something.”
Share to
Related News
France's Hollande fires back at Trump over Paris comments
Iran complying with nuclear agreement, IAEA reaffirms
Iran’s IR-8 centrifuge to raise enrichment capacity 20-fold: AEOI
Head of U.N. nuclear watchdog says Iran continuing commitment to deal
Iran, Luxembourg stress observance of nuclear deal
Tags
Iran ، nuclear deal ، Ravanchi
Your Comment