Mexico spurns US financial assistance under review by Trump

Mexico says it does not need financial aid from the United States, after US President Donald Trump requested a review of Washington’s assistance to Mexico City over the last five years. 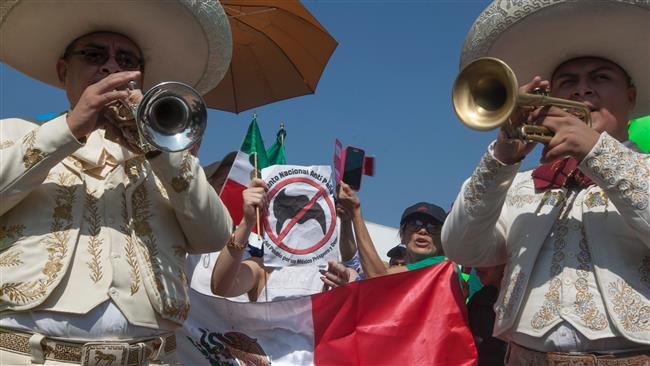 A large part of the US financial assistance to Mexico comes through the Mérida Initiative, a security cooperation agreement between the US and Mexico aimed at eliminating the threats of drug trafficking, transnational organized crime and money laundering. It is also said to pursue furthering respect for human rights and the rule of law.

Mexican Interior Minister Miguel Angel Osorio Chong said on Friday that when the Americans "realize what's left of Mérida, they will understand that it's not even that significant.”

From 2008 to 2016, the US Congress allocated $2.6 billion to Mexico City on security assistance under the Mérida partnership. The US Congressional Research Service has already reported that by November 2016, only $1.6 billion of the amount had been spent on the declared aims of the initiative.

On January 25, just five days after taking office, the US president signed executive orders to begin the construction of a wall on the border with Mexico to deter illegal immigrants from entering the US, and to increase the number of immigration enforcement officers who carry out deportations. Since then, ties between the two North American neighbors have largely been centered on the construction of the border wall.
The review of financial assistance to Mexico was part of the edicts, fueling speculation that Trump sought to redirect the undisbursed aid to pay for the costs of the controversial wall.

"We don't object to them moving these resources... Mexico now has its own capabilities,” Osorio Chong further said.

According to an internal US Department of Homeland Security report, the Trump wall could cost as much as $21.6 billion.

The US president had earlier called on Mexican President Enrique Pena Nieto to pay for the border wall, a provocative move that sparked a rift between the two countries. Pena Nieto, however, has repeatedly made it clear that his country would not pay for the project.

On Thursday, US Secretary of State Rex Tillerson and Secretary of Homeland Security John Kelly, who visited Mexico City to calm the tensions, were given a cool reception by the Mexican authorities.
(Press TV)
Share to
Related News
7 dead, 1 injured as military helicopter crashes in Mexico
Tags
Mexico ، US ، Trump
Your Comment