Deadly clashes have broken out between Azerbaijani troops and Armenian separatists over the breakaway Karabakh region, authorities on both sides say. 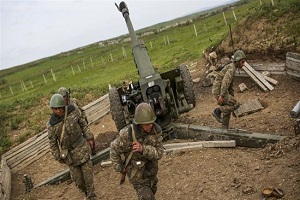 Azerbaijan's Defense Ministry said in a statement that Armenian forces "attempted an intrusion into Azerbaijani territory along the Karabakh frontline" in the early hours of Saturday.

"Fierce clashes erupted at the frontline's Khojavend-Fizuli sector," the statement said, adding the Azerbaijani military "suffered losses in manpower as they courageously repelled the enemy's attack."

Armenian officials reported their own version of the clashes, accusing Azerbaijani forces of attacking separatist positions along the south-eastern and eastern sectors of the frontline.

They accused "Azerbaijan's political and military leadership" of increasing tensions at the frontline and spreading disinformation.

"Armenia is committed to the ceasefire and calls on the Azerbaijani side to refrain from steps that would further escalate the situation," a Defense Ministry statement said.

The latest fighting came after three Armenian soldiers were killed in clashes with Azerbaijani forces on December 29, 2016.

The former Soviet republics of Azerbaijan and Armenia have been locked in a lingering conflict over the disputed region and frequent exchanges of fire nearly spiraled into an all-out war last year.

In April 2016, at least 110 people on both sides were killed as simmering tensions flared into the worst skirmishes in decades over the region.

A Russian-brokered truce ended the four days of fierce clashes in April but attempts to re-launch the stalled peace process since then have not been successful.

Karabakh is internationally recognized as part of Azerbaijan but it is governed by the self-proclaimed Karabakh republic backed by Armenia.

Baku and Yerevan have quarreled over the region since Armenian separatists captured the territory in a war that claimed nearly 30,000 lives in the early 1990s and ended in a fragile 1994 ceasefire deal. The two sides, however, never signed a solid peace pact.