Iran’s Commander of Army Naval forces, Admiral Sayyari, issued the the start of the final stage of “Velayat 95” naval maneuver from the most advanced full-Iranian destroyer deck in Bandarabbas. 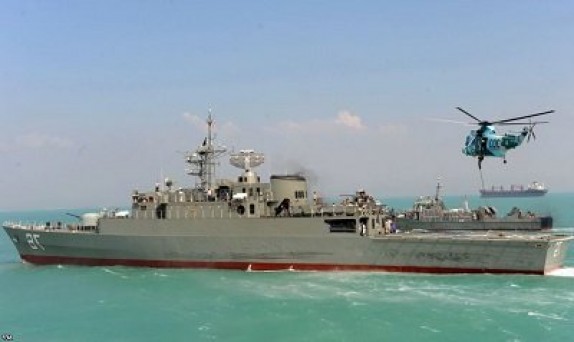 Iranian Commander of Army Naval forces Admiral Sayyari issued the the start of the final stage of "Velayat 95” naval maneuver in Bandarabbas.
In the maneuver being held in an area of 2 million square kilometers, from Hormoz Canal to Oman Sea, Indian Ocean and Bab ul-mandab, surface and sub-surface floating units of the army naval forces accompanied by marine helicopters perform their assigned missions.
In addition to the marine helicopters settled on the floating units, other aviation units of the strategic naval force including reconnaissance patrol aircraft, hovercrafts, and drones observe all of the movements in the region.
Also, protecting systems of the naval vessels, including different types of advanced radars, sonar systems, and chaff systems, all produced domestically, will be tested and evaluated during the maneuver.
Mobile healthcare systems, field hospitals, and logistic units also take part in the maneuver to provide the maneuver fighters as well as the countryman inhabitants of Makran coasts with free medical services such as radiology, sonography, and surgical operation.