US President Donald Trump says he will not attend this year’s White House Correspondents’ dinner, reflecting a break with past presidents amid growing tensions between his administration and the media. 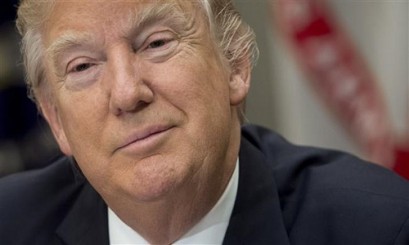 "I will not be attending the White House Correspondents' Association Dinner this year. Please wish everyone well and have a great evening!" Trump wrote in a tweet on Saturday.
Trump’s announcement came as several news organizations, including CNN and MSNBC, say they may not participate in this year's event at the Washington Hilton Hotel.
The annual event, organized by the White House Correspondents’ Association (WHCA), honors journalists who cover the White House and awards scholarships to aspiring reporters. WHCA has issued a statement saying that it "looks forward to having its annual dinner on April 29."
The WHCA typically invites the president and members of his staff. A comedian is brought in to roast the commander in chief, who then delivers lighthearted remarks.
Trump attended the dinner in 2011, where he was repeatedly mocked and teased by then-President Barack Obama. Trump chose to skip the dinner during the 2016 presidential campaign, despite receiving a number of invites from the media.
Trump's decision not to attend this year’s event is his latest thrust against American news outlets, which he has tried to discredit by labeling them "fake," "crooked," and "dishonest."
"I love the First Amendment; nobody loves it better than me. Nobody,” Trump claimed on Friday at the Conservative Political Action Conference. "But as you saw throughout the entire campaign, and even now, the fake news doesn't tell the truth,” he added. "I say it doesn't represent the people, it doesn't tell the never will represent the people, and we're going to do something about it.”
Trump's announcement came following his administration's latest clash with the news media on Friday, when White House press secretary Sean Spicer barred several major news organizations from attending a briefing in his office.
Several news outlets, including The New York Times, The Hill, Politico, and CNN were barred from the question-and-answer session. Several right-leaning news organizations as well as some major networks such as ABC were allowed to attend.
The Associated Press and Time magazine, whose correspondents were allowed into Spicer’s briefing, refused to attend, because of the way it was handled.
Meanwhile, WHCA President Jeff Mason said the dinner "has been and will continue to be a celebration of the First Amendment and the important role played by an independent news media in a healthy republic."
"We look forward to shining a spotlight at the dinner on some of the best political journalism of the past year and recognizing the promising students who represent the next generation of our profession," he added.
(Press TV)
Share to
Related News
Trump says Obama behind leaks
US drone strike kills high-ranking al-Qaeda leader in Syria
Americans must ‘resist’ Trump’s proposed boost to military spending
Drunken driver injures 28 at New Orleans Mardi Gras parade
Democrats pick Perez to lead party against Trump
Wary of Trump unpredictability, China ramps up naval abilities
Trump admin. considers quitting UN Human Rights Council: Report
Republican lawmakers advance bills to criminalize mass protests
CNN, NY Times banned from White House briefing
Tags
teump ، white house ، dinner ، media
Your Comment