US to resume military drills with Egypt: CENTCOM chief

The administration of US President Donald Trump intends to resume major military drills with Egypt, according to the head of the Central Command, amid concerns that the Middle Eastern country is tilting towards Russia. 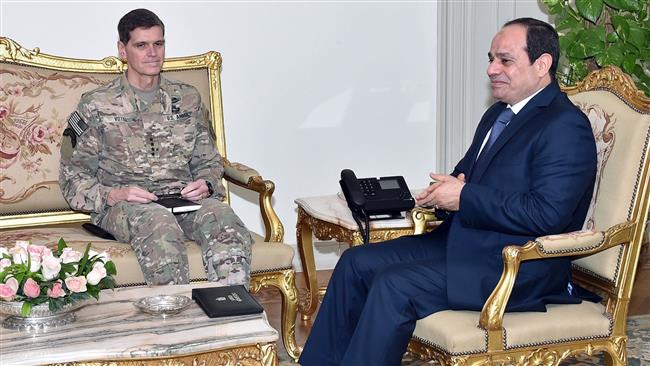 "It is my goal to get that exercise back on track and try to re-establish that as another key part of our military relationship,” General Joseph Votel, who oversees the US military operations in the Middle east, told an Egyptian TV network as he visited Cairo on Sunday.

Upon an order by former President Barack Obama in 2013, Washington halted major drills with Cairo and banned the sales of strategic weapons to the country to protest the government's heavy-handed crackdown on protesters.

Alarmed by Cairo’s tilt towards Moscow, Obama cleared the way for the delivery of F-16 fighter jets, Harpoon missiles and M1A1 Abrams tanks in order to mend ties with the long-time ally.

He also told Sisi that he would protect Washington’s $1.3 billion in annual military assistance to Cairo, despite some attempts to cut the funding.

Back then, the White House justified the move as being "in the interest of US national security.”

Relations between Washington and Cairo have started to warm under Trump, who has called Sisi a "fantastic guy.” A delegation of Egyptian ministers is reportedly going to meet with Trump over the next few months.

American and Egyptian military forces held their first exercise in 1980. The cooperation was gradually expanded until it became a major biannual event, known as Operation Bright Star.

Egypt is seeking to resume it relationship with the US to the pre-2013 level, which allows it to finance military purchases several times the amount of $1.3 billion in annual aid.