Former U.S. president George W. Bush has described the political climate in Washington as "pretty ugly" under Donald Trump's presidency but expressed optimism the United States would pull through despite the divisive political discourse. 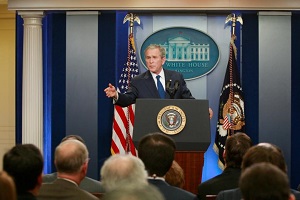 Promoting his first art book "Portraits of Courage: A Commander in Chief’s Tribute to America’s Warriors", Bush said, however, that he felt no anxiety about the direction the country was headed in.

"I'm optimistic about where we'll end up," Bush said. "We've been through these periods before and we’ve always had a way to come out of it. I'm more optimistic than some."

Trump, the first Republican president since Bush left office, won the November presidential election after beating 16 other candidates to the party's nomination, including Bush's brother Jeb.

Prominent Republicans within the establishment wing of the party, including Bush and his father, former president George H.W. Bush, shunned him or offered tepid support.

Bush and his wife Laura spoke to People at their Dallas home. Proceeds from the book, a collection of portraits of wounded veterans, will help fund veterans' health care and employment programs at the George W. Bush Presidential Center.

The couple told the entertainment magazine that the center’s immigration ceremonies, reproductive-health programs for women in Africa and leadership training for Muslim women from the Middle East stand in contrast to Trump's isolationism.

"There's a lot of ways to speak out," he added. "But it's really through actions defending the values important to Laura and me. We're a blessed nation, and we ought to help others."
Bush shrugged when People magazine asked if Trump's immigration policies could threaten the center's programs.

"Now that you mention it, it might bother me but we’ll figure out how to bring them over," he said.