US President Donald Trump said his predecessor Barack Obama is personally behind the growing intelligence leaks and nationwide protests against his administration. 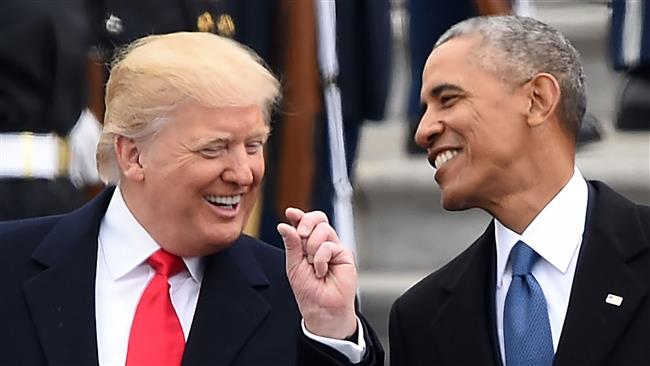 During a Fox News interview that aired on Tuesday, Trump was asked if he thought people from the Obama administration were "organizing” protests and taking other measures to undermine him.
"No, I think he is behind it. I also think it is politics, that's the way it is," Trump replied.
Frustrated by a stream of intelligence breaches, Trump also claimed that there were connections between Obama’s team and the devastating leaks that have dogged him during his first month in office.
"You never know what's exactly happening behind the scenes. You know, you're probably right or possibly right, but you never know,” Trump said.
"I think that President Obama is behind it because his people are certainly behind it.
And some of the leaks possibly come from that group, which are really serious because they are very bad in terms of national security,” he added, without offering any evidence.
A number of Obama’s former campaign staffers have been among the groups helping the ongoing movement against Trump, which began on his inauguration day.
The group Organizing For Action, for instance, comes from Obama's campaign team and has 14 professional organizers, who teach activists how to vocalize opposition to the top policies introduced by Republicans.
Trump had made similar charges against his predecessor earlier this month, saying that the "Obama people" leaked the details of his phone conversations with Mexican and Australian leaders.
He has also blamed intelligence agencies like the FBI and NSA for leaks that forced his national security adviser, retired General Mike Flynn, to resign over his reported ties to Russia.
CNN reported on Monday that Trump was in favor of a decision by Sean Spicer, his press secretary, to check the White House personnel’s phones and make sure they were not leaking secrets to the media.
Spicer has denied the report.