Turkey has opened the biggest trial of those suspected of involvement in last July's attempted coup against President Recep Tayyip Erdogan. 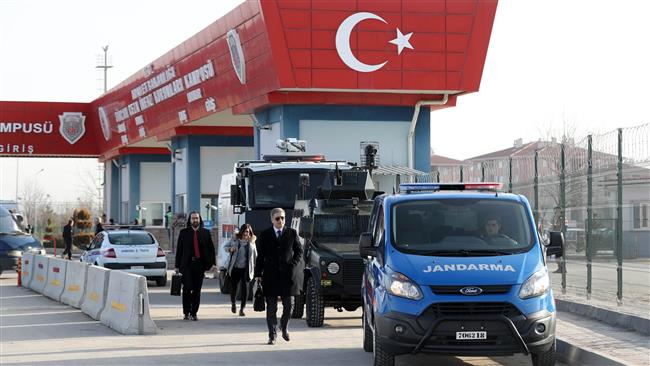 The trial is being held for 330 suspects in a spacious courtroom, which holds over 1,500 people, at Sincan prison outside the capital city of Ankara on Tuesday.
If convicted, the suspects are expected to face multiple life sentences.
Security measures were tight, with a water canon truck stationed on the site and a drone flying over the area. The courtroom was packed with security forces surrounding the suspects as they testified.
The suspects, many of whom are from the Polatli artillery and missile school command in Ankara, have been accused of murder, attempted murder, attempting to remove the Turkish government and parliament or trying to prevent the activities of those institutions, Presstv reported.
The hearing is one of several cases held across Turkey this month, the largest of which was held in the city of Izmir in late January. The court tried 270 suspects, among them US-based Turkish cleric and opposition figure Fethullah Gulen, who was tried in absentia.
Ankara has since accused Gulen of orchestrating and masterminding the coup. He is also accused of being behind a long-running campaign to topple the government via infiltrating country’s institutions, particularly the army, police and the judiciary. Turkey has also outlawed the Gulen movement, his large organization, in the country and has branded it as "Fethullah Terrorist Organization (FETO).”
Gulen has censured the coup attempt and strongly denied any involvement in the violence.
After the attempted coup, Ankara declared a state of emergency and began a massive crackdown, placing over 43,000 people in pre-trial detention. The state of emergency will be in place as the trials continue in the biggest legal process in Turkey’s history.
Ankara has also sacked more than 100,000 others, including military personnel, judges, and teachers, over suspected links to Gulen, as part of the post-coup crackdown. Many rights groups have denounced Ankara’s heavy clampdown.