TEHRAN, March 22, YJC-South Korea says the North has attempted to launch another missile, but the test appears to have ended in a failure. 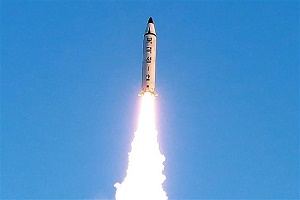 TEHRAN, Young Journalists Club (YJC) -Seoul’s Defense Ministry said in a statement that Pyongyang fired a missile from the eastern coastal town of Wonsan on Wednesday.
"South Korea and the United States are aware of the North Korean missile launch and suspect it was a failure," said a spokesman for Seoul’s military.
The report did not give the number of the missiles put to test or their type.
A spokesman for US Pacific Command, Commander Dave Benham, also said that they detected "a failed North Korean missile launch attempt... in the vicinity of Kalma.”
"A missile appears to have exploded within seconds of launch,” Benham added.
Kyodo News also quoted a source in the Tokyo government as saying that the North may have test-fired several missiles from an area on its east coast, but Japanese Chief Cabinet Secretary Yoshihide Suga later said the government has not confirmed Pyongyang’s missile launch towards the country.
Angered by the annual joint war games currently being carried out by the US and South Korea on the restive peninsula, North Korea has in recent weeks stepped up its missile tests.
Pyongyang rejects claims by Washington and Seoul that the military drills are defensive in nature, saying the maneuvers are a rehearsal for a war against the North.
The North’s state media on Sunday reported that Pyongyang had conducted a test of a new high-thrust engine at its rocket launch station, with leader Kim Jong-un hailing the successful test as "a new birth” of the country’s rocket industry.
Kim said that "the whole world will soon witness what eventful significance the great victory won today carries.”
Washington has further infuriated Pyongyang by starting the installation of an advanced missile system at an air base in South Korea earlier this month.
The missile system, known as Terminal High-Altitude Area Defense (THAAD), is equipped with a powerful detection system known as an X band radar, which experts say would destabilize regional security and upset the region’s current military balance.
The US also occasionally deploys nuclear-powered warships and aircraft capable of carrying atomic weapons in the region.
North ‘not afraid of more US bans’
Pyongyang has been subjected to international pressure, including US sanctions and Security Council resolutions, to abandon its arms development and nuclear programs. Yet, it says the programs are meant to protect the country from US hostility.
On Monday, Reuters quoted a US official as saying on Monday that Washington is considering sweeping sanctions as part of a broad review of measures to counter what is called North Korea’s nuclear and missile "threat.”
Reacting to the report, a senior North Korean diplomat at the UN said his country has no fear of tighter US bans and is determined to pursue the "acceleration” of its nuclear and missile programs.
"Even prohibition of the international transactions system, the global financial system, this kind of thing is part of their system that will not frighten us or make any difference,” said Choe Myong Nam, deputy ambassador at the North Korean mission to the United Nations in Geneva.
The official censured the existing restrictive measures against North Korea as "heinous and inhumane.”
"We strengthen our national defense capability as well as pre-emptive strike capabilities with nuclear forces as a centerpiece,” Choe said.
He added that the North has been under sanctions for "half a century” but the state survives by putting emphasis on "self-sufficiency.
Source:Press TV
Share to
Related News
Yemeni army unveils mid-range ballistic missile: Images + video
South Korea's Park apologizes, promises cooperation in graft probe
North Korea downplays US war threat, stresses combat readiness
North Asia on a knife's edge: Whose position is strongest?
Tags
north korea ، failure ، seoul
Your Comment