TEHRAN, April 9, YJC -The United Nations Children’s Fund (UNICEF) has called for the release of the Rohingya children detained by Myanmar’s government as part of a heavy-handed crackdown on the Muslim minority group in Rakhine State. 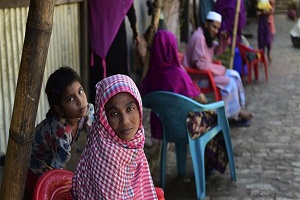 TEHRAN, Young Journalists Club (YJC)-The international body made the plea to Myanmar’s de facto leader Aung San Suu Kyi on Saturday after detailing the plight of around a dozen minors being held in the Buthidaung prison in the restive Rakhine.
"There are some children that are detained in prison, so those are the cases that we’re raising,” Justin Forsyth, the agency’s deputy executive director, said at the end of a brief trip to the Southeast Asian country. "Any child that’s detained is an issue for us.”
"The reality is if you don’t address these issues, particularly for these communities, then it will come back to haunt them, which is partly what has happened,” Forsyth said.
Nearly 75,000 people have fled from the Muslim-majority northern part of Rakhine to Bangladesh since Myanmar’s military launched a crackdown there in October 2016, according to the UN report.
In a televised interview with British media last week, Suu Kyi expressed opposition to labeling the ongoing crackdown against the country’s Muslim minority group as ethnic cleansing despite widespread reports of abuses against them.
The crackdown was launched after a deadly attack on the country’s border guards on October 9, 2016 left nine policemen dead. The government blamed the Rohingya for the assault.
There have been numerous accounts by eyewitnesses of summary executions, rapes, and arson attacks against Muslims since the crackdown began. The military has blocked access to Rakhine and banned journalists and aid workers from entering the zone.
The United Nations has warned that the ongoing human rights violations against the Rohingya Muslims in Rakhine could be tantamount to "crimes against humanity.”
Hundreds of people have been killed and tens of thousands have been forced from their homes to live in squalid camps in dire conditions in Myanmar, Thailand, Malaysia, and Indonesia.
Source:Press TV
Share to
Related News
Myanmar slammed for refusing visa to UN mission investigating abuse of Rohingya
UN rights group names team to probe atrocities against Rohingya
Daesh kills dozens of civilians fleeing west Mosul: Witnesses
Turkey prepared to support possible US military action in Syria: Erdogan
Syria blasts US ‘aggression’, terrorists and Israel hail it
Tags
unicef ، myanmar ، release
Your Comment