US agreed not to repeat Syria strike: Lavrov

TEHRAN, April 14, YJC - Russian Foreign Minister Sergei Lavrov has slammed the recent US missile attack against a Syrian airbase as an act of “provocation” and said that Washington has agreed not to repeat such strikes in the future. 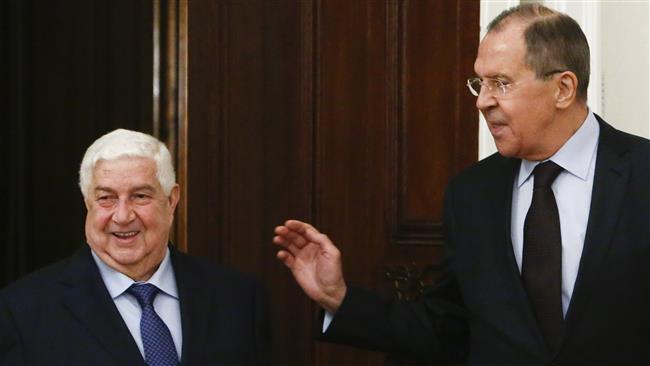 TEHRAN, Young Journalists Club (YJC) - "I would like to stress that the US missile attack on the Shayrat airbase was actually a provocation," Lavrov said at a Thursday meeting with his Syrian counterpart Walid Muallem in Moscow.
Referring to his Wednesday meeting with his US counterpart Rex Tillerson in Moscow, Lavrov said, "The US Secretary of State and I thoroughly discussed the situation and agreed that this should not happen again.”
The Russian foreign minister also warned of ongoing attempts to disrupt peace efforts in Syria and noted, "Not everybody is happy about the progress that we ensured together with our Turkish and Iranian counterparts, as well as with the Syrian government and Kazakhstan, while the United States participated as an observer at the Astana talks.”
"Attempts are being made to disrupt the ceasefire which was agreed in Astana and welcomed by the United Nations Security Council,” he added.
The Russian foreign minister stressed that "Western hysteria” over the recent suspected chemical attack in the Syrian province of Idlib should not hamper efforts to resolve the crisis in the country.
"Against the background of the Western hysteria, it is particularly important to resist provocations and attempts to hamper efforts aimed at resolving the crisis that are being made by participants in the Astana and Geneva processes," he said.
Lavrov hailed Damascus' decision to invite experts from the Organization for the Prohibition of Chemical Weapons (OPCW) to probe into the Idlib incident and underlined the need for "an impartial investigation.”
Last Friday, US President Donald Trump ordered a massive missile strike against the Shayrat airfield in the western Syrian province of Homs, causing some 15 fatalities, including civilians.
Washington staged the strike over the accusation that Damascus had used the base to launch the gas attack in Idlib a few days earlier. Syria has denied the accusation, saying a chemical weapons depot belonging to the anti-Damascus militants had been hit in a conventional Syrian airstrike. Russia has verified that account.
US strike meant to shatter peace efforts in Syria
Syrian Foreign Minister Walid Muallem, for his part, said the US missile attack on the Syrian airfield was aimed at stalling the peace process in Syria.
"I view the US missile strike as an aggression, as it took place without an approval from the United Nations and without any investigation on behalf of the Organization for the OPCW, which could have identified those responsible behind the use of chemical weapons," Muallem said.
"We see that after Trump entered office, Washington’s role in the Astana and Geneva processes was minimized. It means, they do not want the peace process to be a success," he added.
On Thursday, Russian Deputy Foreign Minister Gennady Gatilov said the next round of Syrian peace talks is scheduled to be held in Astana on May 4, Presstv reported.
He also cited UN special envoy for Syria Staffan de Mistura as saying that similar talks in Geneva are expected to be held in mid-May after the fourth round of the Astana meeting.
The Astana talks gather the Syrian government, on the one side, and the country’s political and armed opposition, on the other, at the negotiating table. Iran and Russia mediate the process on behalf of Damascus, while Turkey sides with the militants.
The peace negotiations got off the ground after the moderators successfully mediated a nationwide ceasefire in Syria.
The ceasefire was brokered last December by Russia and Turkey and with the support of Iran between the Syrian government and militants.
The Astana discussions have mainly focused on consolidating the ceasefire, paving the way for the resumption of a parallel UN-led peace process between Syria’s warring sides in Geneva, Switzerland. The latest round of the UN-sponsored talks wrapped up on March 31.
Share to
Related News
Enemies seeking to disrupt Iran’s security: Ayatollah Khamenei
Russian Syrian envoy in Iran Thursday
Over 80% of Russians consider US attack on Syrian airfield as 'provocation'
Iran: US in no position to talk about human rights
Tags
US ، Lavrov ، Russia
Your Comment