TEHRAN, April 14, YJC - The United States is prepared to launch a preemptive strike against North Korea should American officials become convinced that Pyongyang is going ahead with a nuclear weapons test, a report says. 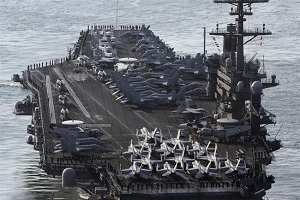 TEHRAN, Young Journalists Club (YJC) -Citing several senior US intelligence officials, NBC News reported on Thursday that the US military is ready to attack North Korea with conventional weapons if the country reaches for a nuclear trigger.
North Korea has announced that a "big event" is coming, and, according to US officials, Pyongyang could test a nuclear weapon as early as this weekend.
The officials told NBC News that the United States has deployed two destroyers capable of firing Tomahawk cruise missiles in the region.
According to the network, one of the destroyers is located 300 miles (about 483 kilometers) from the North Korean nuclear test site.
There are also US heavy bombers located in Guam. It was reported previously that the USS Carl Vinson aircraft carrier strike group would be operating in the western Pacific Ocean close to the Korean Peninsula instead of partaking in a series of previously planned Australian port visits.
In a statement on Thursday, North Korea blamed the US for "driving the situation to the brink of a nuclear war” by deploying warships to the Korean Peninsula.
"By relentlessly bringing in a number of strategic nuclear assets to the Korean Peninsula, the US is gravely threatening the peace and safety and driving the situation to the brink of a nuclear war," the statement noted.
In an earlier statement, North Korea said that it was ready for "war” after the US deployed the strike group to the Korean Peninsula.
Source:Press TV
Share to
Related News
USS Carl Vinson sails in Japanese waters towards Korean Peninsula
Japan urges ‘peace, pressure’ in North Korea row
North Korea vows to launch 'preemptive strike' in case of US 'provocation'
US prepared to strike North Korea if missile test appears imminent
America's first Muslim woman judge found dead in New York
White House accuses Russia of Syria chemical attack 'cover up'
Tags
US ، Korea ، US
Your Comment