Conflict can break out on Korean Peninsula any moment: China

TEHRAN, April 14, YJC - China has warned that “conflict could break out at any moment” on the Korean Peninsula, as North Korea and the United States increasingly seem headed for a potential military confrontation. 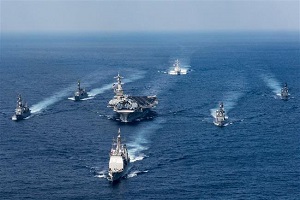 TEHRAN, Young Journalists Club (YJC) -Speaking on Friday, Chinese Foreign Minister Wang Yi also said there would be "no winner” in a potential war, and that the party that triggered conflict would "pay the price.”
"Dialogue is the only possible solution,” he said during a joint press conference with his French counterpart Jean-Marc Ayrault in Beijing.
Tensions between North Korea and the US have significantly ratcheted up over the past weeks. The US has been concerned by North Korea’s nuclear tests, which Pyongyang believes act as deterrence against a potential invasion by the US or South Korea.
The US has deployed a strike group, including a large aircraft carrier, to the Korean Peninsula, and North Korea has said it is ready for war.
​US President Donald Trump threatened on Thursday that North Korea was a problem that "will be taken care of.”
An NBC News report on Thursday anonymously cited senior US intelligence officials as saying that the US was ready to launch a preemptive conventional strike if officials were convinced that North Korea was about to follow through with a new nuclear weapons test.
A White House foreign policy adviser said Friday that the US is assessing military options in response to North Korea's weapons programs, saying another provocative test was a question of "when" rather than "if."
There are reports of activity at a nuclear test site in North Korea ahead of Saturday's 105th anniversary of the birth of the country's founder Kim Il-Sung.
Trump has called on China, the North’s main ally, to help denuclearize Pyongyang. But the US president has also said the US would go it alone if China did not help.
Earlier on Friday, the North Korean Foreign Ministry censured the United States for the deployment of "huge nuclear strategic assets” to the Korean Peninsula.
"The US introduces into the Korean Peninsula, the world’s biggest hotspot, huge nuclear strategic assets, seriously threatening peace and security of the peninsula and pushing the situation there to the brink of a war,” the North Koran Foreign Ministry on Friday.
"This has created a dangerous situation in which a thermo-nuclear war may break out any moment on the peninsula and posed serious threat to the world peace and security, to say nothing of those in Northeast Asia,” it added.
The North Korean Foreign Ministry also blasted the US for recently launching a missile strike on Syria while simultaneously speaking of "peace by strength.”
The US Navy fired 59 Tomahawk missiles at a Syrian airbase last Friday. Some observers have said the strike was also meant to send a signal to North Korea.
Source:Press TV
Share to
Related News
China denies any deployment of troops near North Korea
China's Xi urges peaceful resolution of North Korea tension in call with Trump
Japan plans to join US strike group headed for Korean Peninsula: Sources
Tags
conflict ، korean ، china
Your Comment