TEHRAN, April 14, YJC - Turkey threatens to suspend EU migrant deal if no visa waiver provided Turkish Foreign Minister Mevlut Cavusoglu said his country would re-evaluate or suspend all agreements under its controversial refugee deal with the European Union in case the 28-nation bloc does not grant Turkish citizens visa-free travel through most of Europe. 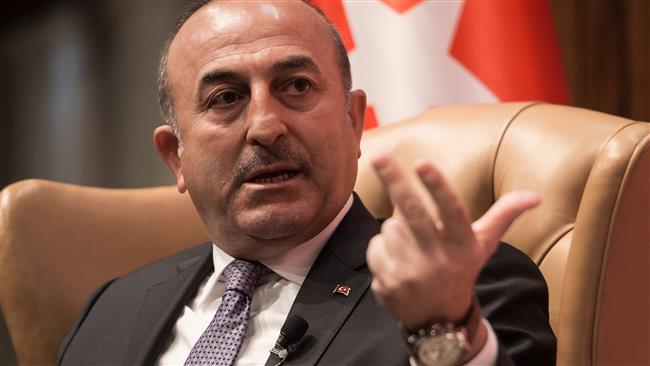 TEHRAN, Young Journalists Club (YJC) - Speaking in an exclusive interview with the nationwide Turkish-language A Haber television network on Friday, Cavusoglu stated that the deal and visa liberalization are a package, noting that Turkey reserves the right to either reconsider or shelve these if one element is not fulfilled.
In March 2016, Turkey and the EU sealed a controversial deal intended to stem the flow of refugees from Syria and other troubled countries to Europe in return for financial and political rewards for Ankara.
Under the agreement, the bloc will take in thousands of Syrian refugees directly from Turkey and reward it with money, visa liberalization and progress in its EU membership negotiations.
Critics, however, have accused Turkey of blackmailing Europe over the refugee crisis.
Visa-free travel for 79 million Turkish nationals is a contested issue as some EU states fear it would open the doors to more migration to the bloc, which is already struggling with the biggest influx of refugees since World War II.
Ankara has on occasion threatened to walk away from the deal should it not get the visa liberalization, accused the European Union of not sticking to a promise to grant Turkish nationals the right to travel visa-free in Europe.
On March 16, Turkish President Recep Tayyip Erdogan said the EU could "forget about" its migrant agreement with Ankara, accusing the bloc of not sticking to a promise to grant Turkish nationals the right to travel visa-free in Europe.
The remarks came a day after Turkish European Union Affairs Minister Omer Celik says time has come for the Ankara government to re-evaluate its migrant deal with the EU.
"If you look carefully, the European Union always talks about co-operating in the fight against terrorism and managing the migrant crisis. They cover up the other issues. When we look at the obligations the EU should have fulfilled I don’t see any reason why Turkey should maintain the migrant deal,” Celik told Reuters.
He added, "At this point we understand that it has become clear EU will not take an objective and fair stance on visa liberalization. This is clear. We spoke many times. It is not fair and objective when they tighten their terror laws and ask us to loosen up ours. We cannot loosen up our terror laws under these circumstances.”
Share to
Related News
Syria resumes evacuation after terrorists kill 112
Tags
Turkey ، EU ، migration
Your Comment