TEHRAN, April 15, YJC - Turkish President Recep Tayyip Erdogan has censured the Organization for Security and Cooperation in Europe (OSCE) for reporting that "no" campaigners in Turkey's upcoming referendum on extending presidential powers have faced crackdown by Ankara. 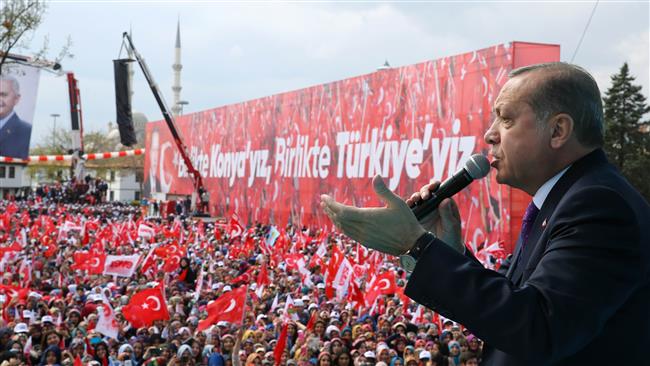 TEHRAN, Young Journalists Club (YJC) - "Now the Organization for Security and Cooperation in Europe says if the result is ‘yes’, that means there are a lot of problems. Who are you? First of all, you should know your place. This is not your duty”, said Erdogan in a strongly-worded speech at a rally in Konya, the capital city of the Turkish province of Konya, on Friday.
Erdogan's comments referred to a recent interim report published by the OSCE, which will monitor the April 16 referendum, on the campaign atmosphere in the Anatolian country between March 17 and April 7. The report concluded that "no" supporters had faced bans, police interventions, violent scuffles at their events and arrests in several cases.
It also alleged that Ankara's senior officials, including Erdogan himself and Prime Minister Binali Yildirim, equated "no" campaigners with the mid-July 2016 failed coup plotters or terrorist organizations, noting that the referendum would be conducted under an extended state of emergency imposed following the attempted putsch.
Sunday's referendum is aimed at abolishing the office of the prime minister and giving more executive powers, including issuing decrees, declaring emergency rule, appointing ministers and state officials and dissolving the parliament, to the currently largely ceremonial position of president in Turkey. Critics say the vote would give the president dictatorial powers.
If approved, the new constitution would allow Erdogan to stand in two more election cycles, potentially governing until 2029.
"You don’t have such a mission. You cannot talk about what would happen if the outcome is ‘yes’ or ‘no.’ You cannot give such a report," added the Turkish leader, addressing the OSCE.
The OSCE Office for Democratic Institutions and Human Rights conducted the limited referendum campaigning observation mission in Turkey at the invitation of the country's authorities.
The report also said that the freedom of expression had been further restricted by the closure of numerous media outlets and the arrest of a large number of journalists in the wake of the failed coup. "The fact that a number of political leaders and activists remain behind bars has seriously curtailed some groups’ ability to campaign," it added.
The coup began on July 15 last year, when a faction of the Turkish military declared that it had seized control of the country and the government of President Erdogan was no more in charge. The attempt was, however, suppressed a few hours later.
Following the failed coup, Ankara launched a heavy-handed crackdown on those deemed to have played a role in the attempt, which was blamed on the outlawed Gulen movement. The US-based cleric has, however, categorically denied the allegation.
Tens of thousands of soldiers, police, judges, teachers and government workers have been arrested or suspended over the same accusations since July last year, Presstv reported.
The international community and rights groups have been highly critical of the Turkish president over the massive dismissals and the crackdown.
Share to
Related News
Watchdog sounds alarm over media freedom worldwide
Turks vote in historic referendum on expanding Erdogan's power
Mega-bomb dropped by US on east Afghanistan kills 94: Official
Tags
turkey ، erdogan ، referendum
Your Comment