TEHRAN, April 15, YJC - Impoverished families in Iran will get a rise of up to 50% in monthly allowance, under a program which had been adopted for sometime but will go force from Saturday night. 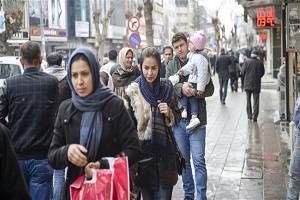 TEHRAN, Young Journalists Club (YJC) -More than 2.1 million families covered by Imam Khomeini Relief Foundation and Welfare Organization of Iran will receive cash handouts of between $40 and $125 a month depending on their size, Iranian news agencies reported on Saturday.
"Hence, the regular allowance of Imam Khomeini Relief Foundation and Welfare Organization pensioners will rise between 16% to 50% from tonight,” ISNA news agency reported.
Iran’s parliament approved the plan more than three months ago, but its implementation now has prompted critics to accuse the government of intentionally postponing it until the election season.
Iranians will go to the polls on May 19 to elect their 12th president and members of local city and village councils for the fifth time since 1979.
President Hassan Rouhani registered on Friday to run for a second four-year term. His supporters count on the 2015 nuclear accord with world powers to rifle him to power again in the face of stiff challenge from Principlists who criticize his economic record.
In 2013, when Rouhani won in a single round, his supporters questioned tactics used by his predecessor Mahmoud Ahmadinejad during the elections, including payment of cash handouts to all Iranian families ahead of voting.
Rouhani’s critics say the president has now resorted to the same tactics, especially focusing his attention to a down-trodden electoral base which mostly supported his rivals in 2013.
His administration has always looked at cash handouts as an albatross round the neck. The program is a legacy of the former government after Ahmadinejad scrapped subsidies for basic goods and introduced a system of compensation dubbed "targeted subsidy plan”.
Rouhani’s administration is under pressure for budget amid remaining US sanctions and lower oil prices, running a massive debt to Iranian contractors and banks.
The government has to dole out billions of dollars to the citizens under the program but budget constraints have forced officials to roll back the largesse to those who don’t need it.
At one time, the government launched a nationwide campaign to persuade citizens into voluntary withdrawal and some 4 million Iranians registered to forgo receiving the rolls.
Explaining the process of the cancellations, Labor and Social Welfare Minister Ali Rabiei cited a pensioner of an Iranian auto manufacturing company who turned out to be owning several cars and small industrial plants.
Iranian motorists also saw a monthly allotment of 60 liters of subsidized gasoline canceled under the Rouhani administration.
The government, however, did not go further, fearing a backlash at the ballot boxes despite cheers from those who urged Rouhani to drop more families from the program.
Source:Press TV
Share to
Related News
Iran inaugurates mega gas projects
Iran Defense Ministry showcases achievements, including some making first appearances
Flooding, landslides kill 25 in northwest Iran
South Korea’s Iran oil imports soar to record high
Tags
iran ، inflation ، Impoverished
Your Comment