TEHRAN, April 16, YJC -A former Mexican state governor, who had come to symbolize corruption within Mexico’s ruling party, was arrested on Saturday in Guatemala, Mexico’s attorney general’s office says, in what could be a boost for embattled President Enrique Pena Nieto. 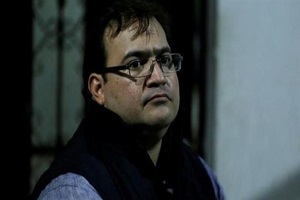 TEHRAN, Young Journalists Club (YJC) - Javier Duarte, the former governor of Veracruz State wanted on graft and organized crime charges, was detained in a hotel in the colonial town of Panajachel, about 129 kilometers west of Guatemala’s capital, the national police said in a statement.
"They found him in the lobby of the hotel,” police spokesman Pablo Castillo told Reuters.
Elected governor in 2010, Duarte presided over a sharp deterioration in security in the state, punctuated by the discovery of mass graves and a spate of killings of journalists during his watch. He was also accused of carrying out various schemes with illicit resources, including using ghost companies to transfer public funds.
The Mexican government will seek Duarte’s extradition, but it was not immediately clear how quickly that could happen or whether Duarte might seek to block it.
The arrest was carried out with the help of Interpol agents, Mexico’s attorney general’s office said.
Lorenzo Meyer, a political scientist and historian at Mexico’s National Autonomous University said Duarte’s capture would likely serve as a boost for the Mexican president, whose popularity has fallen dramatically over the past couple of years.
"This is a plus for Pena Nieto because it goes against this accusation that he and [Interior Minister] Osorio Chong were really fine with Duarte fleeing [and] hiding, and not knowing anything about him,” said Meyer.
Agriculturally-rich Veracruz, which is also rich in oil and is on Mexico’s Gulf coast, is one of the country’s largest states and has historically been a stronghold of Pena Nieto’s Institutional Revolutionary Party, or PRI.
Duarte was a PRI party stalwart in Veracruz for years until he was expelled from the party in October last year.
He resigned from his position as governor that same month, a few weeks before his six-year term was due to end.
In June, the opposition National Action Party won a hotly-contested race to succeed Duarte in a contest widely seen as a repudiation of rampant corruption and a stinging defeat for the PRI.
An arrest warrant for Duarte was issued in October 2016, about the same time he disappeared, and public auditors have since called his administration of state accounts among the worst cases of misappropriation of public funds in years.
Source: Reuters
Share to
Related News
Trump proposes $18 billion cuts to domestic programs to pay for wall
Canadian border authorities detaining record number of Mexicans
Military wins in first Trump budget; environment, aid lose big
Tags
fugitive ، mexican ، guatrmala
Your Comment