Former Fatah Movement leader Marwan Bargouthi has called for solidarity with Palestinian prisoners ahead of a mass hunger strike. 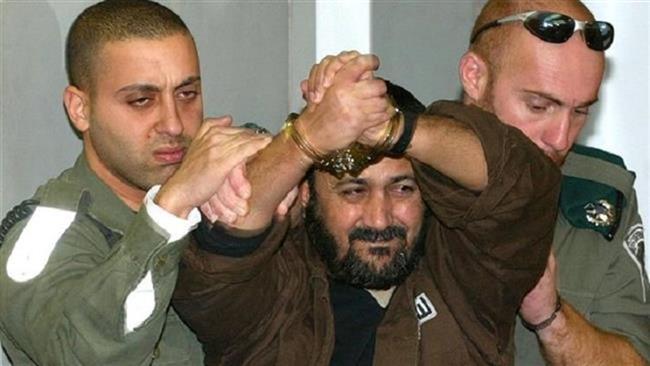 "We call upon our people to join demonstrations, rallies, sit-ins, and general strikes, as we urge (Palestinian) President Abu Mazen (Mahmoud Abbas), Palestinian leadership, and Palestinian factions to take steps at every level to free prisoners and support them in their battle," said Bargouthi in a Sunday released statement.

A large number of Palestinian prisoners from across the political spectrum are set to go on hunger strike on Monday in protest to the condition of Israeli prisons and to mark Palestinian Prisoners’ Day.

Bargouthi went on to accuse the Tel Aviv regime of being "accomplice in the occupation's crimes through detentions, unjust court sentences, and torture," adding that "prisoners are being tried by illegitimate courts that must be boycotted as tools of the occupation."

He added that the strike has been organized to defy Israeli authorities’ "tyrannical” policies used against Palestinians prisoners, such as "arbitrary detentions, torture, medical negligence, and the deprivation of family visits."

According to a report released by three Palestiniannon-governmental organizations, a total of 6,500 Palestinians, including women, children and lawmakers, are being held in prisons and detention facilities across the occupied territories.