TEHRAN, April 18, YJC - Turkey’s cabinet has extended a state of emergency in the country for another three months just one day after President Recep Tayyip Erdogan wins a referendum extending his executive powers. 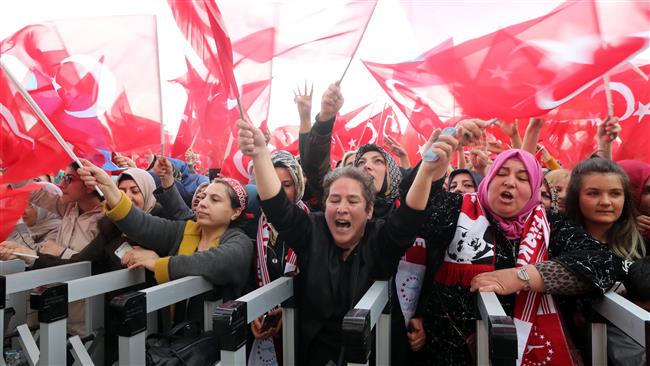 TEHRAN, Young Journalists Club (YJC) -The state of emergency was initially imposed following a failed coup in the country on July 15. Since then, it has already been extended twice.

The decision for the third extension was made late on Monday, following a meeting of the National Security Council (MGK) chaired by Erdogan.

"The recommendation was considered and the Council of Ministers signed to extend the state of emergency for another three months from Wednesday," Deputy Prime Minister Numan Kurtulmus.

Kurtulmus stressed that the extension was aimed at empowering the government to "fight against terrorist groups." "In this struggle, whatever is necessary will be done," he added.

The state of emergency has allowed the government to launch a harsh crackdown on those believed to have played a role in the failed coup.

The massive action, which has seen more than 40,000 arrested and over 100,000 discharged from their jobs, has faced increasing international criticism, especially from Europe, where governments believe Ankara has acted beyond the rule of law.

The state of emergency was to end on April 19 and its extension comes one day after the country voted for constitutional changes which vastly boosted Erdogan´s powers.

The changes would also potentially keep Erdogan in power until 2029. He has already been there since 2003.