Russia warns US against 'unilateral action' on North Korea

TEHRAN, April 18, YJC -Russia has warned the United States against any "unilateral action" against North Korea, saying any response to Pyongyang's nuclear activities should not violate "international law," amid reports of potential military confrontation between North Korea and the US. 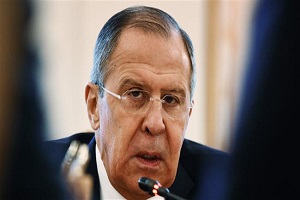 TEHRAN, Young Journalists Club (YJC) - Russian Foreign Minister Sergei Lavrov made the remarks at a news conference in Moscow on Monday, a few hours after US Vice President Mike Pence said the era of "strategic patience" with the North was over, warning Pyongyang not to test US President Donald Trump’s resolve over North Korea's nuclear and ballistic missile programs.
"This is a very risky path. We do not accept the reckless nuclear missile actions of Pyongyang that breach UN resolutions, but that does not mean that you can break international law,” Lavrov said, adding that he hoped there would not be any "unilateral actions like the one we saw recently in Syria.”
The top Russian diplomat was referring to the recent US attack on Shayrat Airfield in Syria's Homs Province with a barrage of 59 Tomahawk missiles, fired from two warships in the Mediterranean Sea, which caused some 15 fatalities, including civilians.
Pentagon's unprecedented offensive on the Syrian soil was conducted without any international authorization.
On Sunday, US and South Korean military officials reported that Pyongyang's latest missile test had failed earlier in the day, with the projectile exploding almost immediately after the launch.
The failed test occurred just a few hours before Pence's scheduled visit to South Korea's capital, Seoul, and just one day after Pyongyang showcased its submarine-launched ballistic missiles (SLBMs) for the first time during a massive military parade.
During recent weeks, tensions between North Korea and the US have increased, raising fears of a potential military confrontation between the two sides. Washington has voiced concern over Pyongyang’s tests, but the North says such launches are an act of deterrence against a potential invasion by the US or South Korea.
On Monday, Pence, while standing alongside South Korea’s acting president, Hwang Kyo-ahn, in Seoul, vowed that Washington's commitment to its ally against any possible aggression by the North was "iron-clad and immutable,” reiterating that "all options are on the table," including military offensive, to forestall Pyongyang's quest to make a nuclear weapon capable of striking the US mainland.
Last week, a US aircraft carrier-led strike group set course for the Western Pacific Ocean close to the Korean Peninsula amid growing fears over the North’s weapons tests.
Last month, Washington particularly infuriated Pyongyang by conducting a joint annual military drill with Seoul and starting the installation of an advanced missile system, known as Terminal High-Altitude Area Defense (THAAD), at an air base in South Korea.
Pyongyang has been subjected to international pressure, including US sanctions and Security Council resolutions, to abandon its arms development and nuclear programs. However, it says the programs are meant to protect the country from US hostility.
Source:Press TV
Share to
Related News
Russia, Iran, Turkey continuing joint work on Syria ceasefire: Lavrov
Trump orders review of US nuclear posture amid North Korea tensions
Russia calls for restraint amid North Korea-US crisis
Kremlin says leaders of Germany, France, Russia, Ukraine to hold talks soon
Poland officially welcomes NATO battalion
Tags
russia ، us ، action ، north korea
Your Comment