North Korea to US: Be ready for ‘all-out war’

TEHRAN, April 18, YJC - North Korea has threatened the US with “all-out war” and announced that Pyongyang will continue to test missiles on a weekly basis. 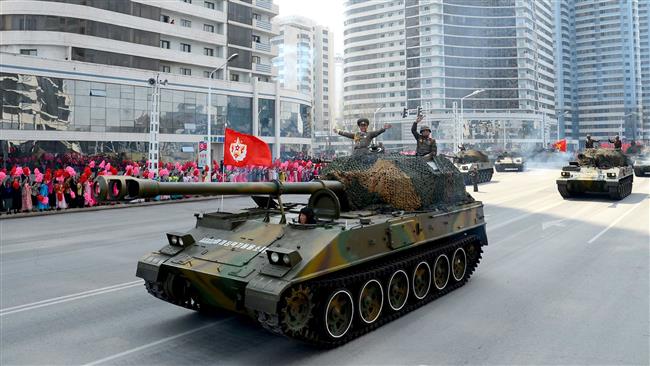 TEHRAN, Young Journalists Club (YJC) -During an interview with the BBC on Monday, North Korea's Deputy Foreign Minister Han Song-ryol stressed that any manner of military action by the US against his country would result in war.

"We'll be conducting more missile tests on a weekly, monthly and yearly basis," he added. "If the US is planning a military attack against us, we will react with a nuclear pre-emptive strike by our own style and method."

Sin Hong-chol, another deputy foreign minister, noted that the North’s army was on "maximum alert" during a trip by US Vice President Mike Pence to the Korean Demilitarized Zone (DMZ), located between the North and South.

"If we notice any sign of assault on our sovereignty, our army will launch merciless military strikes against the US aggressors, wherever they may exist, from the remote US lands to the American military bases on the Korean Peninsula, such as those of Japan and elsewhere," said Sin. "The nuclear weapon in our possession is not illusion; it is not a commodity that may be traded for American dollars - nor is it for sale. So it cannot be put on the negotiating table with the aim to rip it off," he added.

During his visit to the DMZ, Pence refereed to the US’s "iron-clad alliance” with South Korea and stated that Washington would try to maintain stability on the Korean Peninsula through strength.

He further warned the North that "all options are on the table as we continue to stand shoulder to shoulder with the people of South Korea."

Meanwhile, North Korean Deputy Ambassador to the UN Kim In-Ryong told a press conference in New York that Pyongyang was ready for "any mode of war," while stressing that the North would react to a missile or nuclear strike "in kind."

"If the United States dares opt for a military action (...) the DPRK is ready to react to any mode of war desired by the Americans… "We will take the toughest counteraction against the provocateurs," he said.