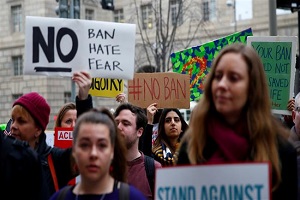 TEHRAN, Young Journalists Club (YJC) -The testimonies will be given to Judge Tanya S. Chutkan of the US District Court in Washington on Tuesday, Politico news website reports.
Denouncing the US travel ban as counterproductive, the plaintiffs will detail how Iranian students, medical researchers, and others could be disproportionately hurt by the measure.
"It was a dagger in my heart as someone of Iranian-American heritage,” said Cyrus Mehri, a civil rights attorney who is leading the litigation. "I really saw it as a flash point for this diaspora, over half a million strong, that has done so much to contribute to this country and is now in such danger of being potential scapegoats.”
Most of the plaintiffs are said to be using pseudonyms in their court papers amid fears of reprisal by the US administration.
Trump signed the executive order in late January, originally placing a 90-day travel ban on people from Iran, Libya, Syria, Somalia, Sudan, Iraq, and Yemen and a 120-day ban on any refugees. Iraq was removed from the list under a revised version of the ban on March 6.
Read more:
Trump issues new travel ban on Muslims
The January order was blocked by a judge in Seattle amid mass protests worldwide.
The March 6 visa ban has also been put on hold due to court rulings in Maryland and Hawaii, which found the measure was likely unconstitutional and tainted by anti-Muslim bias.
US State Department figures show that Iranians have received more than half of the US visas issued to passport holders from the six countries over the past two years.
Source:Press TV
Share to
Related News
US travel ban discriminates against Muslims: Author
Trump to sign executive order targeting foreign workers
Trump calls to congratulate Erdogan over Turkish referendum
Protesters slam 'mother of all bombs' during Washington rally
With Trump pick aboard, top U.S. court tackles religious rights
America's first Muslim woman judge found dead in New York
At least four killed in protests against Maduro in Venezuela
Tags
travel ban ، court ، US
Your Comment